Ghanaian rapper, Medikal, has confirmed that Shatta Wale paid the school fees of his daughter, Island, for a year.

The pair were interviewed by Kumasi-based radio station, Luv FM. Shatta Wale mentioned that he was a kind-hearted and responsible person, but he does not get the chance to do similar acts of kindness for his son, Majesty. 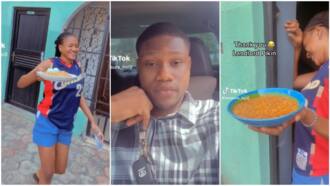 He blamed the mother of his child, Michy, for the strained relationship between him and his son. He noted that he rarely gets to see Majesty and jokingly said he has been childless and without a family for a while.

He mentioned that being a responsible father was probably not his talent and hailed Medikal as a talented father.

The kindness he showed Medikal’s daughter sparked reactions on social media as folks wished he had made the beautiful gesture to a less privileged person.

“The Rich Takes Care Of The Rich.”

“But his son and mum doesn’t benefit from him Ayoo only the two of you knows what’s going on.” “Mdk should let shatta stay away from his family or else one day if fight come he will come online and say he paid this and that and disgrace you.”

The massive growth in the Nigerian music industry seems to have stunned Ghanaian musician Shatta Wale, who recently cried out for help in regard to his career.

Shatta Wale in a tweet via his official Twitter handle described the Ghanaian music industry as a disgrace, adding that the citizens don’t take action.

“Is better we stop arguing with Nigerian Fans, promoters, etc and ask for help. “Me sef I need record label, Ghana music is a disgrace Mek nobody lie you . Shouts to Naija Ghana ppl too deh like talk with no action Yes I have said it ….”

Africa's Stolen Art Debate is Frozen, But It Isn't Dead Yet

Where Is Kwasi Opoku Now?

how backroom deals have put controversial Republicans into key roles