An ambitious crocodile loses battle with a full-grown buffalo


A Nile crocodile recently bit off more than it could chew when it attempted to drag a full-grown buffalo into the river. 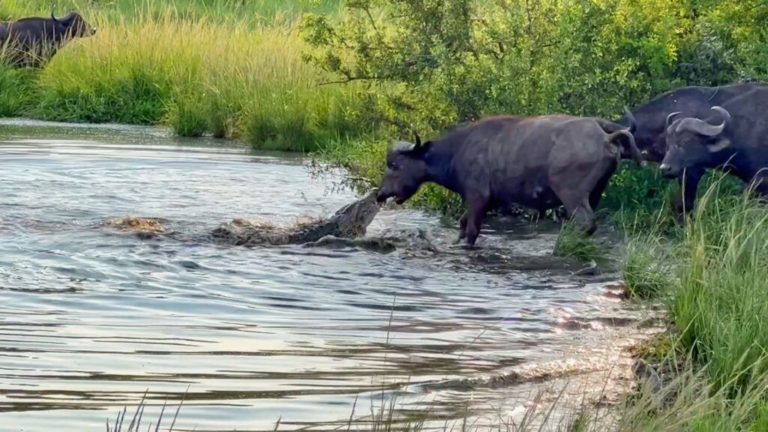 Dr. Marc DeBerardinis, a doctor at Petaluma Orthodontics was lucky enough to capture the entire scene. The story and images shared with LatestSightings.com are truly remarkable.

The South African low-veld area is a region that experiences huge amounts of rainfall during the summer months, making it extremely beneficial for the environment as it thrives in the abundance of water and food. This makes the area very conducive for safari viewings because the large quantities of rainfall mean animals don’t have to move as much in search of water and food.

The lush and thick vegetation also acts as the perfect cover for predators seeking to camouflage while on the hunt for their next meal.

‘We ventured down to the dam in front of Sabi Sabi Earth Lodge to watch the hippos. The sun was starting to set, and the air was beginning to cool. The rumble of buffalo feet made the earth tremble as a massive herd approached the waterhole. They settled in to have their evening drink when chaos erupted from the depths of the dam.’

Buffaloes rely heavily on water which means they have to visit water sources at least twice daily. Due to their huge size, they rarely approach watering holes and rivers with caution or concern because crocodiles usually target smaller prey aiming for a quick and easy kill.

‘As the buffaloes began drinking, the eruption took place at the front of the herd. A crocodile was latched onto the snout of a massive buffalo that was drinking. I sat there in disbelief and amazement. The buffalo let out a deep bellow that echoed through the surrounding bush. The rest of the herd watched in shock. The battle continued with the buffalo trying to free itself and the crocodile holding on with all its bodily fibres.’

A sighting like this is very rare because crocodiles will not risk injury and energy loss for an animal the size of a buffalo. However, this large crocodile was perhaps desperate for a meal. Though many animals thrive during the high rainfall season, crocodiles are among the few animals that suffer. With the ease of access to drinking water, smaller animals are not forced to venture to large watering holes to quench their thirst. This means crocodiles need to adapt and move from large river systems and dams to smaller concentrations of water in the hope of a meal.

‘In the end, the buffalo broke loose and the crocodile retreated back to the safety of the water. An occurrence that surely taught the miscalculating crocodile that choosing your battles is always a wise decision.’

Watch the video below:

ALSO READ: Hyena passes out after mating with female