Crypto Winter: Why Investors Are Leaving This Popular Stock Out In the Cold


Robinhood Markets (HOOD -2.20%) is perhaps the ultimate poster child for the financial market frenzy of 2021. Retail investors rushed into stocks, options contracts, and cryptocurrencies in a stampede, armed with a slice of U.S. government stimulus payments and a thirst to find the next life-changing investment. Robinhood was largely their trading platform of choice.

But that story flipped in 2022. Society has mostly returned to normal with the lifting of most pandemic restrictions, and consumers are faced with soaring cost-of-living pressures in the form of high inflation and rising interest rates.

The cryptocurrency market, which thrives on speculation, has become collateral damage as the retail crowd pulls back on risky investing activity. That has dealt a serious blow to Robinhood’s revenue, as the company rushed into the crypto brokerage business in 2020 to satisfy its customers’ appetite for the asset class.

Confidence in cryptocurrency has collapsed

The total value of all cryptocurrencies in existence topped $2.9 trillion in November 2021, but that figure has plummeted 72% to just $800 billion as of this writing. Sentiment toward most speculative investments is deeply negative at the moment, which has fueled the decline, but the crypto industry is reeling from a seemingly never-ending string of bankruptcies and failures.

The collapse of cryptocurrency exchange FTX is the latest, and it has been revealed that it owes its customers as much as $3 billion. Unlike in traditional finance, deposits made to cryptocurrency brokers or exchanges often can’t be insured, which means customers may lose everything with no chance of any recoveries when things go wrong.

In Robinhood’s filings, it discloses that cryptocurrency investments are not covered by the Securities Investor Protection Corp., which would usually cover as much as $500,000 in losses for investors in the event a brokerage fails.

Many cryptocurrency investors are finding this out the hard way, and each time a high-profile failure makes headlines, confidence in the industry seems to fall to new lows.

That has crushed Robinhood’s revenue

Robinhood made a somewhat opportunistic move into cryptocurrency markets in 2020, and it paid off handsomely at the time. At the height of the crypto craze in the first and second quarters of 2021, cryptocurrency trading drove the majority of the company’s revenue growth.

But as the chart below shows, Robinhood’s cryptocurrency revenue plunged by 78% in the third quarter of 2021. It still hasn’t recovered, and that has been a major drag on the company’s total revenue.

In fact, its total quarterly transaction revenue has grown by less than 3% in the past two years, based on its $208 million result in the third quarter of 2022. 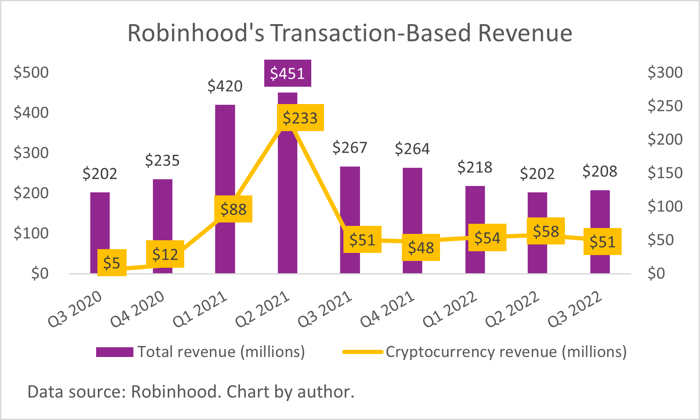 To be clear, Robinhood’s other segments have performed similarly of late, including share trading and options trading. But the point is that cryptocurrency trading may not hold the keys to growth for the company, whereas shares and related derivatives are almost certain to be a core part of its business over the long term.

The main challenge Robinhood has now is keeping its user base. Its monthly active users reached a peak of 21.3 million in second-quarter 2021 — coincidentally the same quarter that cryptocurrency revenue peaked — but the figure has since dropped to 12.2 million users.

There is some good news for Robinhood

Robinhood stock has declined by 90% from its all-time high, and is trading near rock bottom right now. It has a market capitalization of $6.6 billion, though the company has $6.25 billion in cash and equivalents on its balance sheet, so investors are really valuing Robinhood’s business at a little more than $300 million.

The company’s net losses make up part of the pessimism, as it has burned $862 million in 2022 alone. But they are improving — Robinhood’s net loss of $175 million in the third quarter was its smallest in two years. While that’s great news, if the company can’t find a way to spark revenue growth, it will be a much smaller business compared to its size glory days of 2021.

That won’t necessarily be a bad thing, because Robinhood has an opportunity to become a leaner and more profitable enterprise, which should win points with investors. It probably won’t be enough for its stock to reclaim its all-time high (or anywhere close), but it would go a long way toward arresting its steep decline.

Don’t expect cryptocurrencies to save the day, though. Robinhood will likely need to lean on its traditional share and options trading segments, and that may require substantial innovation to keep its user base engaged.

We tried a fusion of culture with music

“Ghana Music Is a Disgrace”: Shatta Wale Cries Out, Turns to Nigerians for Assistance