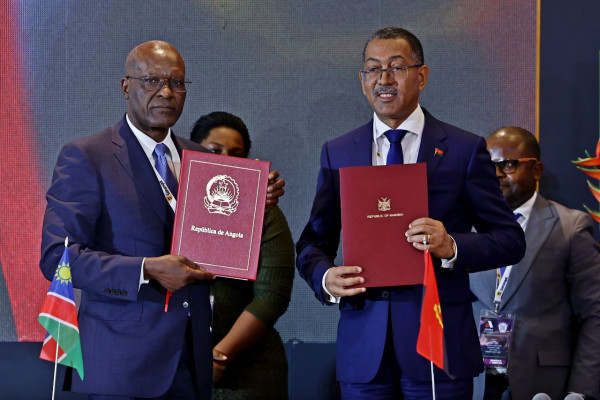 Angola’s Ministry of Mineral Resources, Petroleum and Gas and Namibia’s Ministry of Mines and Energy signed a Memorandum of Understanding (MoU) at this year’s Angola Oil & Gas (AOG) 2022 Conference and Exhibition (https://bit.ly/3VidqIa) in Luanda which will enhance bilateral cooperation in the petroleum and natural gas sector and improve the mutual social, economic and environmental interests between the two countries.

Signed by H.E. Minister Diamantino Azevedo, Minister of Mineral Resources, Petroleum and Gas for the Republic of Angola and Hon. Tom Alweendo, Minister of Mines and Energy for the Republic of Namibia on 29 November, the MoU is poised to promote and strengthen cooperation between Angola and Namibia within the fields of petroleum and natural gas by establishing an institutional framework that facilitates the exchange of information, the management of data management and geological studies, and the development of joint projects.

“This is going to be an amazing partnership where both Angolans and Namibians can share knowledge and expertise. We can learn a lot from Angola’s successes in the industry. It is important for Namibia to partner with Angolan companies to drive up local content so that Namibians are ready for their jobs, contracts and the empowerment of everyone in the sector,” stated Hon. Minister Alweendo.

Additionally, the MoU will address the challenges of the energy transition within the African context and encourage local capacity building between the neighboring countries through technological cooperation and the transfer of skills.

“This is an amazing opportunity for us to work hand in hand with Namibia. This will give Angola a chance to share its skills, lessons learned and to help Namibia have a successful oil and gas sector,” stated H.E. Minister Diamantino.

Taking place under the theme, ‘Promoting an Inclusive, Attractive, and Innovative Oil and Gas Industry in Angola,’ the AOG 2022 Conference and Exhibition seeks to drive bilateral cooperation in Africa, with the MoU between Angola and Namibia expected to play a key role in the hydrocarbon industries and the socioeconomic development of the two countries.

The MoU further reaffirms Angola’s position as a leader in African energy, allowing the southern African country to leverage its position as Africa’s largest oil producer and share its expertise across the energy industry in pursuit of regional market development.

Distributed by APO Group on behalf of Energy Capital & Power.

Supporting women leaders and aspirants to unleash their potential

Supporting women leaders and aspirants to unleash their potential

How NFT court summons could change the legal landscape