3 steps for farmers to reduce reliance on artificial fertiliser

Cropping is currently based on classic agronomic disciplines, coupled with high inputs and good returns.

However, by improving efficiency, substituting for alternatives and redesigning agricultural systems with the inclusion of legumes, farmers are able to reduce reliance on costly fertiliser expenditure

Joel Williams, independent plant and soil health scientist says: “Irrespective of farming type and starting point, we can all benefit from using this framework to decouple from inputs.

“This technique enables us to conceptualise the transition from conventional farming practises towards a more regenerative approach.”

The first step is to improve efficiency of existing applications.

This can be achieved in two ways. The first is to use less nitrogen overall by minimising losses, while the second involves using the most efficient form of nitrogen.

Ensuring the optimum spray timing is also essential for effective uptake. Spraying when humidity levels are upwards of 70% during the early morning or late afternoon is beneficial, he continues.

If this target is not met, nitrogen is prone to be washed from the leaf or volatilised into the atmosphere.

Foliar fertilisers are also absorbed better in slightly acidic conditions. Spray pH should be a maximum of 6 but ideally 5 to 5.5. Ensuring the correct pressure and nozzle will also have an impact.

Mr Williams notes that waxy brassicas are less responsive to foliar nitrogen so the addition of a wetter sticker or spray oil to the tank mix can benefit these crops.

The addition of a carbon source such as humic or fulvic acid can benefit spray mixes.

This is because carbon binds to nitrogen to form a larger, more stable molecule complex, which improves uptake and is less likely to be lost to the environment.

Overall, when implemented correctly, foliar strategies can be an effective complement to the process of reducing soil-based applications.

The most efficient form

The second way of improving nitrogen efficiency is using its most efficient form.

All living organisms require nitrogen to convert into amino acids in order to make proteins – the building blocks of life.

Different forms of nitrogen require different amounts of metabolic energy to be developed into proteins.

Plants are able to metabolise ammonium more efficiently than that of nitrates.

Nitrate uptake involves a multi-step process, which means the plant expels more energy and requires a greater amount of essential micronutrients to be converted into ammonium and then, consequently, the amino acid glutamine.

This comes at a greater metabolic cost to the plant and this energy could have been used elsewhere – for example, for growth.

“Furthermore, we know that plants ultimately want protein. It is a constant energetic drain for the plant to convert raw ingredients into this compound.

“Why noy provide the peptides and proteins in a more complete form?” he says.

“After all, plants want nitrogen in an organic form, not inorganic, which is what artificial fertiliser currently provides.

“By shortcutting these steps, we can deliver nutrients in an organic, more readily usable form.”

Plants can absorb these larger organic molecules (and even whole bacteria) just as well as inorganic forms. Organic forms of nitrogen can be supplied via:

However, the nitrogen content of these substances, such as manure, can vary, which is why regular testing and a combination of both organic and inorganic can helps strike the right balance.

Once farmers have improved efficiency and reduced the use of fertilisers, they can substitute conventional practises for alternatives.

Now that you’re using different inputs and methods, it is easier to stop using a given product and switch it for another. This could be a natural biostimulant or a N-fixing bacteria, for example.

“Use these products in a system that is designed for it to work. Don’t just opt for a product and assume it will be the solution.

“For example, microbes require nutrients for optimal N-fixation. So a limiting micronutrient will hold back performance.”

“The efficiency and substitution phase are really important first steps and it’s important to slowly make the transition, but equally, you don’t want to get trapped in either of these phases as redesign is where the real change happens,” he says.

Farmers are often stuck in input dependency as they are constantly buying an input of some sort. This is where system redesign comes in to play – where agriculture is decoupled from the input dependency.

“Imagine if we could redesign our farming system to incorporate more legumes through companion cropping into our rotation.

“Legumes are the king of nitrogen-fixing, and building them into our system will reduce dependency on nitrogen inputs, striving for a multifunctioning system that produces high-yielding crops, but also supports ecosystems.”

As legumes grow, they release a number of root exudates in the form of amino acids, peptides and proteins into the soil that are readily available to non-legume crops. 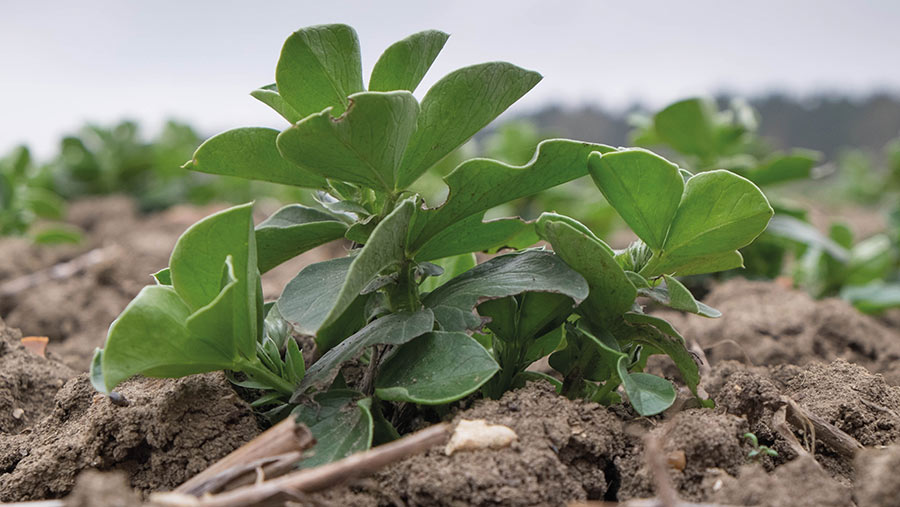 Studies have shown that a legume will fix more atmospheric nitrogen when grown with a companion crop of wheat or maize compared to a monoculture bean crop as there are two-way relationships between crops.

COP27 Was Billed as the First “Food COP.” Did it Deliver?

The bacteria that serve as fertilisers and growth promoters

“The non-legume crop stimulates the bean to fix more nitrogen in order to get more nitrogen in return. If both plants are hosts of mycorrhiza fungi, amino acids can be shared directly through their fungal hyphae,” he explains.

“What’s more, rather than the crops competing for nutrients, we find they can work in harmony.

“For example, we usually find that when yield increases, protein decreases and vice versa, but when wheat is grown successfully with a companion crop of beans, we see both yield and protein increases,” continues Mr Williams.

He concludes this is an area of science we know very little about, but there are huge opportunities and great potential for farmers to gain from incorporating legumes into crop production and reducing reliance on artificial nitrogen going forwards.

Joel Williams was a guest speaker at the Hutchinson’s Agroecology conference in Birmingham. Mr Williams consults on soil management, plant nutrition and integrated approaches of sustainable food production and currently lives in Canada.

A Century of Black Figuration in Painting at Zeitz MOCAA

COP27 Was Billed as the First “Food COP.” Did it Deliver?

The bacteria that serve as fertilisers and growth promoters

Why calf cough is unreliable as early warning for pneumonia

Business Clinic: How can we check a septic tank meets regulations?

What should you do now?