Food continues to be a source of comfort, creativity, nostalgia and education, and 2022 brought about some stellar writing on the topic. This year’s crop of best food books runs the gamut of African American, Ukrainian, Chinese and Puerto Rican cookbooks, uniting across cultures, and includes a memoir that exposes the underbelly of the French restaurant kitchen, history books on fermentation and pies, and a searing account of the loss of our food diversity and how we can save it. All told, these ten favorites will inspire and ignite, while teaching us about the importance of diversity and respect.

Koshersoul: The Faith and Food Journey of an African American Jew by Michael W. Twitty

What do Jewish and African diaspora food have in common, and how do they combine to create a unique cuisine? Culinary and cultural historian Michael W. Twitty’s follow-up to his James Beard Award-winning The Cooking Gene examines the intersection of these two dynamic identities and presents an analysis of dual diasporas, a cultural history, and an upsetting examination of bigotry. The personal narratives of Twitty and other Black Jews offer a rich background for 50 innovative recipes, such as Caribbean compote, kosher-Cajun rice dressing and Louisiana-style latkes, although to categorize this as a cookbook would be to deny its cultural and historical significance—and Twitty’s evocative and poetic writing style. Watermelon and Red Birds: A Cookbook for Juneteenth and Black Celebrations by Nicole A. Taylor

Now that the holiday of Juneteenth, celebrating the emancipation of Black slaves, has cemented its place in the national conversation—and become a federal holiday as of last year—this cookbook by James Beard Award-nominated food writer and home cook Nicole Taylor couldn’t be more timely. As she writes, “I’m a Southern woman, born into a working-class family when crisp white churchgoing gloves and Sunday beer bootleggers (my hometown didn’t have alcohol sales until 2012) were in serious fashion and full deep freezers were a status symbol.” Taylor has always celebrated the holiday with her family, and she artfully details the storied cookouts with overflowing spreads and plenty of “red drink,” sharing 75 recipes that marry traditional African American recipes with modern variations like the Afro egg cream, beef ribs with fermented harissa, and radish and ginger pound cake. There’s also a guide that shares where to find sundries like hot sauces, jams and spices produced by companies with owners from Black, Indigenous or other marginalized communities. A Waiter in Paris: Adventures in the Dark Heart of the City by Edward Chisholm

“It’s the boundary between two worlds: the Paris you see and the Paris you don’t,” writes Edward Chisholm, an Englishman who moved to Paris in 2012 and spent several years as a waiter while trying to build up his writing career. Now, his debut book, a no-holds-barred memoir detailing his time waiting tables in one of the world’s hottest restaurant cities, reveals what really goes on behind the scenes of fine dining establishments. This book is the next generation of Anthony Bourdain’s Kitchen Confidential and Stephanie Danler’s Sweetbitter, with Chisholm exposing the often-shocking mayhem of the restaurant kitchen in visceral detail. He deftly uses the Parisian restaurant as a microcosm for France as a whole, with immigrants, people of color and blue-collar workers at the bottom of the food chain. Sweet Land of Liberty: A History of America in 11 Pies by Rossi Anastopoulo

Ever wonder how apple pie became a symbol of America? Food writer and editor Rossi Anastopoulo slices into the history of pie in the good ol’ US of A, from pumpkin pie on Thanksgiving to apple pie on Independence Day, using the iconic American dessert to tell the story of a country. Still, it’s not all sweet, as she details how molasses pie traces its origin to slavery and Jell-O pie reveals the history of gender disparity in our country. All in all, Anastopoulo shares interesting facts behind 11 all-American pies, like how the first recipe for American apple pie appeared in a 1796 cookbook called American Cookery, which is believed to be the first cookbook ever published in the newly minted United States. The book includes a recipe for each pie, too. Budmo!: Recipes from a Ukrainian Kitchen by Anna Voloshyna

In this colorful cookbook you’ll find recipes for dishes like cold borscht, dark cherry varenyky and sweet pumpkin rice kasha from Ukrainian native Anna Voloshyna, who moved to California in 2011. Known for hosting pop-up dinners and cooking classes, Voloshyna is also a food stylist, photographer and blogger. In her debut cookbook, she offers modern and American spins on the typical dishes she grew up with, and she also includes details like food origins, customs and traditions in each recipe’s headnote. Budmo, which is how Ukrainians say “cheers,” shares the country’s complicated history that has led up to the current war, while simultaneously celebrating its varied and vibrant cuisine. BUDMO!: Recipes from a Ukrainian Kitchen

Part memoir and part cookbook, this debut from our country’s first Puerto Rican food columnist Illyanna Maisonet dives into the author’s personal family recipes, which she painstakingly documented from her extended relatives through the years, and also includes her interpretation of dishes by Puerto Rican friends, chefs and roadside food vendors. There are 90 recipes including traditional Puerto Rican dishes like tostones, pernil and mofongo. Other highlights include sloppy joes and sancocho. But more than just the recipes, Maisonet shares how migration and colonization have influenced and progressed Puerto Rican food, ingredients and techniques. In explaining why her family wraps their pasteles in foil, Maisonet writes in her intimate, conversational style, “When you think of my grandma coming to Sacramento as a 17-year-old mother of two in 1956, you have to wonder where the hell would she have found banana leaves in Northern California?” She posits that this progression is no less authentic than the original method, and that the resourcefulness of Puerto Ricans has evolved their cuisine into what it is today: dynamic and delicious. Our Fermented Lives: A History of How Fermented Foods Have Shaped Cultures and Communities by Julia Skinner

Food historian and fermenting expert Julia Skinner details the history of fermentation of foods across cultures, from kimchi to tepache and everything in between, in her latest volume. She details how fermented foods have continually come up across human history, examining the ever-evolving microbiome and food preservation techniques across cultures, while also explaining different fermentation types and their processes. Alongside are 42 historic recipes for fermented foods, including various vinegars, lacto-fermented fruits and vegetables, soy sauce and ketchup. Eating to Extinction: The World’s Rarest Foods and Why We Need to Save Them by Dan Saladino

Food journalist Dan Saladino, who worked for 25 years at the BBC, presents the surprising facts of where our food comes from in his debut book. Did you know that half of our calories come from rice, wheat and corn? Or that 95 percent of the milk we drink in the U.S. comes from just one breed of cow? Astoundingly, only four corporations hold sway over the bulk of the global seed market. When laid bare, these facts reveal a serious problem with our global food chain, starting with the risk of losing our traditional foodways and by no means ending with the danger of vulnerability in the face of climate change. Saladino crisscrossed the globe when writing this book to experience and record our most at-risk foods, from the root vegetable murnong, once a primary food of Aboriginal Australians, to Geechee red peas in Sea Island, Georgia. He weaves the stories of the people who continue to cultivate and consume these near-forgotten foods while simultaneously providing a guide for how to rescue our food system before it’s too late. The Woks of Life: Recipes to Know and Love From a Chinese American Family by Bill Leung, Kaitlin Leung, Judy Leung and Sarah Leung

The Leungs, who run the “Woks of Life” blog, welcome you into their home, sharing recipes and family memories with humor and aplomb. Each of the four family members brings something to the table: Mom Judy takes care of traditional Chinese dishes, and dad Bill teaches readers how to complete restaurant-style dishes like Cantonese roast duck and beef with broccoli, which he gamely notes, “I cranked out many orders in my day, so I’ve had plenty of practice,” thanks to his time spent working in his parents’ Chinese restaurant. Meanwhile, daughters Sarah and Kaitlin focus on weeknight-friendly meals where vegetables are the star ingredients. The cookbook also includes an intricate guide to Chinese staples and handy tools to stock your kitchen with, plus how-tos on Chinese cooking techniques like velveting. 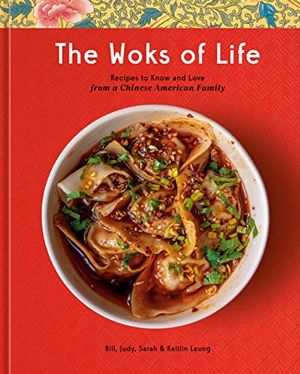 To Boldly Grow: Finding Joy, Adventure and Dinner in Your Own Backyard by Tamar Haspel

While many Americans started “victory gardens” during the pandemic, plenty have fallen by the wayside. Washington Post food columnist Tamar Haspel hopes to change that. When she and her husband left Manhattan for two acres of land in Cape Cod in 2008, they decided to embark on a journey to produce as much of their own food as possible, without assistance. This translates into things like refining their own sea salt, foraging for edible plants and hunting for meat. Haspel aims to show that any of us can feed ourselves from our own backyards, as long as we have ingenuity and the will to try. In the end, the book serves as a guide as much as a memoir, with failures as well as successes documented.