The show ends on October 24. 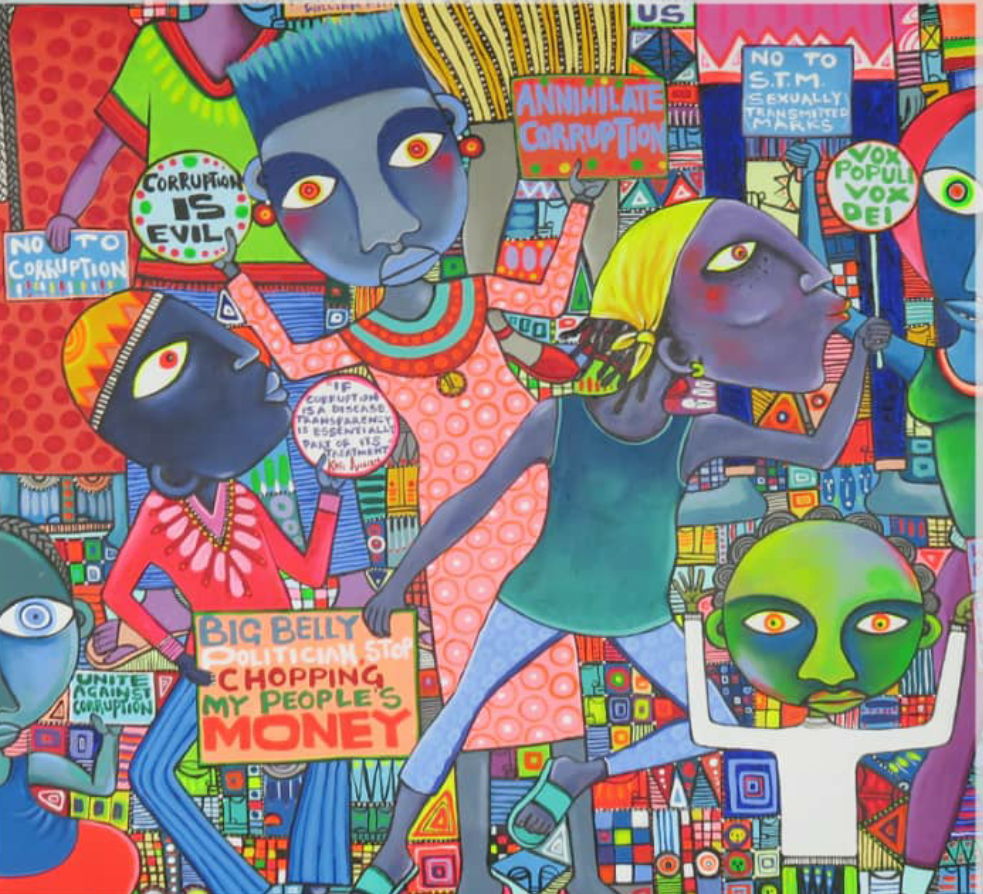 According to its curator, Mathew Oyedele, “Connecting Africa explores layers of issues, conversations, social banter and observations through works of artists from different parts of Africa.”

He said the themes, therefore, “include consumerism, peace-within, inclusion, social commentary, connectivity and relationship as the growing youthful population demands. It is in dialogue with contemporary demand and agitations across the continent, where the youth are finally finding their voice.”

The artists
MOUSSA Issarou is a Camerounian painter, who grew up watching and observing elders make shoes in his community. Seeing his interest in this direction, his father pushed him to artistic creations such as drawing, screen printing and calligraphy, promising in the same manner, to enrol him in an art school, which did not exist in his city.

Moussa has showcased his works on platforms such as the Yelwata Maroua Festival 2017, the 2020 Cultural Return, and also, the International Visual Art Colloquium ‘Arts and Emergence in Africa’, ​​where he was awarded the first position. He was equally awarded the regional winner of the Young Hopes competition organised by Doual’Art in June 2021.
Blaise Afrique

BORN in the village of Kumbo North West Grass Field area of Cameroun in 1993, Afrique draws and experiments with colours.

After high school, he became a mathematics teacher and simultaneously did a four years study in the arts (2012 to 2015) under Brazilian arts professor, Paulo Lemos, who doubled as a missionary stationed in Cameroon for six years.

After this four-year study, he went ahead to get a bachelor’s degree in visual Arts /Arts History (2017 to 2020), graduating as the best student in his university.

His medium of expression is acrylic on canvas in which he employs masks, symbolic elements from African culture, geometric patterns, figurines, lines, colours, and sometimes, textures in the synthesis of images that he describes as ‘Afro Abstract Figurative paintings.

His strength lies in figurative painting alongside visual art, using his exceptional penmanship with oil paint, acrylic paint and a ballpoint pen to depict the rawest most unfiltered human emotions in his artwork, earning him recognition as the ‘African Bic Art Master’ in the People’s Choice Awards (2019-2020) and the Bic brand ambassador, where his theme was centred around “Life Talking about the everyday girl child happiness”. This work earned him a nomination as one of the best artists in Africa.

Dominique Zinkpè
ZINKPÈ was born in Cotonou, Benin in 1969. His approach to the arts is complex and diverse. Far from confining himself to plastic writing, he appropriates all kinds of media, insofar as they allow him to express himself, especially, in media forms such as installation, drawing, painting, sculpture and video.

His singular line can be recognised on the canvas; as intimate, powerful and provocative. As for his sculptures, they are sometimes made from rolled up burlap, and sometimes, are born from small amalgamated wooden figurines. These variations on the theme of the twins of the beliefs of southern Benin are all surprising explorations.

Samuel Tete- Katchan
TETE-KATCHAN was born in 1975 in Togo and currently resides in Accra. After his secondary education in 1997, he worked at the art studio of Joseph Amedokpo, studying and developing his own style from the ‘Osogbo Art’. One year later, he started exhibiting his paintings. He attended the Instituto Rural de Arte Hosz del Jucar (Albacete in Spain) in 2007.

Tete-Katchan has had on numerous occasions, the opportunity to use art as a medium for social development, by working on projects having a direct impact on communities.

Nathanaël Vodouhè
VODOUHÈ devoted himself to drawing at a very young age in an attempt to find the features of a loved one who left far too soon. Since then, he has grown to become an artist who approaches his work with a fine mind and a steady hand without detour or concession. His paintings, sculptures, as well as his installations and performances, are an ‘invitation to dialogue on his perception of the world, on social facts or mechanisms of enslavement.

As a self-taught artist, Vodouhè choses to rub shoulders with his elders – Zinkpè, Vistchois Mwilambwe Bondo, Aimé Mpané, Freddy Tsimba or Barthélemy Toguo, and was able to find through his experiments, a singular writing. Irrespective of the medium, Vodouhè unveils works that reveal a pronounced interiority and a barely whispered spirituality.

His sculptural research, a kind of magma of pigments and wood consumed in places, presents alchemy of clean and smooth surfaces on which everything seems to slide, associated with ashen cracks like so many emanations from wounds reminiscent of the rough side of life.

Itchie Bidias Romaric
ROMARIC Bidias was born in 1995 in Kumba, Cameroun, as the last born of a family of four. He discovered his talent in art at a very young age, having worked and being mentored by artists such as Max Iyonga. He, thereafter, went through a training programme organised by a local brewery company for six years. He began his professional art career after high school and had his first show in 2013.

Speaking on the show, which brings together artists with a connection to the gallery, Patty Chidiac Mastrogiannis, founder, Alexis Galleries, said, “our role as a gallery is to position ourselves through platforms that shape and initiate a conversation on happenings in our immediate, and by extension, distant environment. This is the crucible where this exhibition is formed.”

She added: “Our aim, through this exhibition, is to instigate an epiphany for the need to chart a new path and direction for Africa. Hence, the title, Connecting Africa.”