Are You And Your Spouse Financially Compatible?

by Involve Africa
in Finance
0 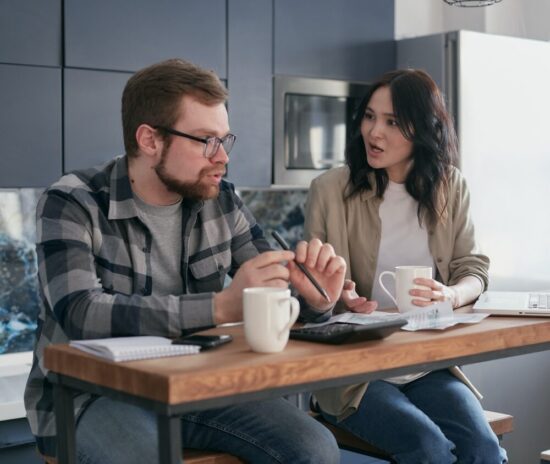 Are I Bonds A Good Investment?

How to Save Money And STOP Living Paycheck-to-Paycheck

When you enter a relationship, fall in love, and ultimately get married, wondering whether you’re financially compatible with your spouse might not enter your mind. However, if money trouble starts brewing, it can be abundantly clear that a fundamental disconnect in your money styles, perspectives, or goals is harming your ability to see eye-to-eye. Figuring that out when something’s already going wrong makes a challenging situation worse. That’s why it’s wise to determine if you’re financially compatible with your spouse well before that first money fight happens.

What Is Financial Compatibility?

In the simplest sense, financial compatibility involves having similar views regarding monetary matters. This is particularly true of common points of contention – like spending or savings habits – and general goals. While you and your spouse don’t have to think identically. The ability to both understand and respect the other person’s view is a critical part of the equation.

Generally, if your perspective on money is so far apart that you don’t make sense to one another. Your odds of conflict are certainly higher. Similarly, if you aren’t able to talk about your differences respectfully, that could be a sign of incompatibility.

How to Determine If You’re Financially Compatible with Your Spouse

Determining whether you’re financially compatible with your spouse isn’t as difficult as it initially seems. Often, by examining a few key points in your relationship, it’s easy to see if there’s a disconnect. Here are some questions that can help you get started.

Can You Talk About Money Peacefully and Honestly?

If talking about financial matters is simple, and both you and your spouse feel comfortable enough to be completely transparent about their money decisions, that’s a sign of compatibility. It means you feel confident in your ability to be honest and understand one another well enough to see a situation similarly, making it easier to feel okay with your spouse’s financial choices.

If talking about money usually leads to arguments, that’s a red flag. It could mean that you have fundamentally different perspectives about financial matters, making them a point of contention. Similarly, if one spouse is hiding transactions from the other, that shows a fear of judgment, which could spell trouble for the relationship.

Have You Seen Each Other’s Credit Reports (and Scores)?

Today, getting a free copy of a credit report requires little more than a trip to AnnualCreditReport.com, a few clicks of a mouse, and some personal information. Since that’s the case, there’s no reason why spouses shouldn’t be able to sit down and review each other’s reports together. If you or your spouse are resistant to the idea, that indicates a potential trust issue, which isn’t great.

Similarly, spouses should have at least a general idea of each other’s credit scores. In many cases, it’s possible to access at least a free VantageScore using various apps, and free FICO scores are available through many lenders and some services. Again, if you or your spouse are too worried to reveal that information to one another, that’s a troubling sign.

However, if you both have seen this information or are comfortable sharing it right now, that’s a positive indication that you’re comfortable enough with one another to look the reports and scores over and have related discussions. As a result, you’re likely at least somewhat financially compatible.

Are You on the Same Page About Budgeting and Saving?

Financially incompatible couples rarely see eye-to-eye when it comes to budgets or savings goals. If you have differing opinions about spending or debt repayment, that’s a potential issue. If you also can’t agree about how much you should set aside or the purpose behind why you’re saving, that can also lead to problems.

Without financial compatibility regarding budgeting and saving, one spouse may take actions that fundamentally contradict the other spouse’s needs, preferences, or wishes. Should that occur, a disagreement is essentially guaranteed.

However, if you’re largely on the same page, fights about budgets, saving, and spending are often rare. While you may have the occasional difference of opinion, the issues are typically large enough to become anything more than a simple discussion.

Do You Spend Large Amounts of Joint Money Without Talking First?

Most spouses agree that major purchases warrant a conversation before any money changes hands. If either you or your spouse thinks nothing of spending large sums or joint cash without having a conversation with your partner, that could indicate that there’s a disconnect.

In some cases, a lack of that conversation is seemingly disrespectful. That’s particularly true if the other spouse thought the money was going toward another goal, such as paying an expense or saving for a specific purpose.

In contrast, if you both frequently reach out to one another to talk about large purchases before they’re made, that shows you respect each other enough to ensure everyone’s on board. Or in the case of unavoidable and legitimate emergencies, it highlights that you don’t want your spouse surprised, so you act proactively to keep them in the loop, which is also a positive.

What to Do If Financial Compatibility Is an Issue?

If you and your spouse aren’t overly financially compatible, that doesn’t mean the relationship can’t work. Instead, it may simply take more effort to build a solid foundation. A journey that can be worthwhile if you’re largely compatible in other areas of your lives.

In some cases, your best bet is to enlist support from a financial therapist that specializes in couples. They can help you work through your differing perspectives about money. They can help find common ground, and develop financial plans that make you both comfortable. They’re equally adept at handling the monetary aspects as they are the emotional ones, allowing you to tackle challenges on both fronts to make progress fast.

Beyond that, creating opportunities for open, honest conversation is essential. Additionally, not hiding any financial activities from other another is a must. By starting there and adding financial therapy, you could make notable headway, allowing you to build compatibility over time.

Are there any other ways that couples can figure out if they’re financially compatible with their spouse? Did you notice red flags in your relationship that you’d like to share? Were there unexpected good signs that you don’t want people to overlook? Share your thoughts in the comments below.

Come back to what you love! Dollardig.com is the most reliable cash back site on the web. Just sign up, click, shop and get full cash back!

Tamila McDonald has worked as a Financial Advisor for the military for past 13 years. She has taught Personal Financial classes on every subject from credit, to life insurance, as well as all other aspects of financial management. Mrs. McDonald is an AFCPE Accredited Financial Counselor and has helped her clients to meet their short-term and long-term financial goals.

Best Things to do in Belfast, Northern Ireland

A lucrative new African football league is coming: the pros and cons

Are I Bonds A Good Investment?

How to Save Money And STOP Living Paycheck-to-Paycheck

A lucrative new African football league is coming: the pros and cons