Why the right perennial grass balance is key in AB15 mixes


The first half of August is the key time for drilling AB15 stewardship mixes and failing to balance them sufficiently with perennial grasses may seriously compromise their effectiveness in managing problem grassweeds, according to new trial results.

AB15 stewardship mixes are gaining popularity in arable rotations, not only as an alternative source of income, but for their benefits to wildlife and soil health.

They are also useful in tackling blackgrass infestations.

See also: Why brome is a rising problem when tackling blackgrass

To help farmers get the most out of them, farmed environment specialist Marek Nowakowski carried out field-scale trials on ground with historic grassweed problems at Agrii’s Newton Purcell iFarm.

It involved three legume fallow mixes established in the autumn of 2020 and retained for two years.

Replicated four times in 12x200m plots across the field were:

Managed to stewardship guidelines with three cuts in the first year to deal with emerging grassweeds, all plots developed well and had good levels of ground cover and flowers in their second season – and this despite being sown in strips with a cross-slot drill and rather later than ideal.

Six random 3sq m quadrat counts per plot this June showed substantial differences in both blackgrass and brome populations between the treatments.

An average of 19 heads/sq m and 18 heads/sq m respectively, were recorded in the no-grass legume mix. 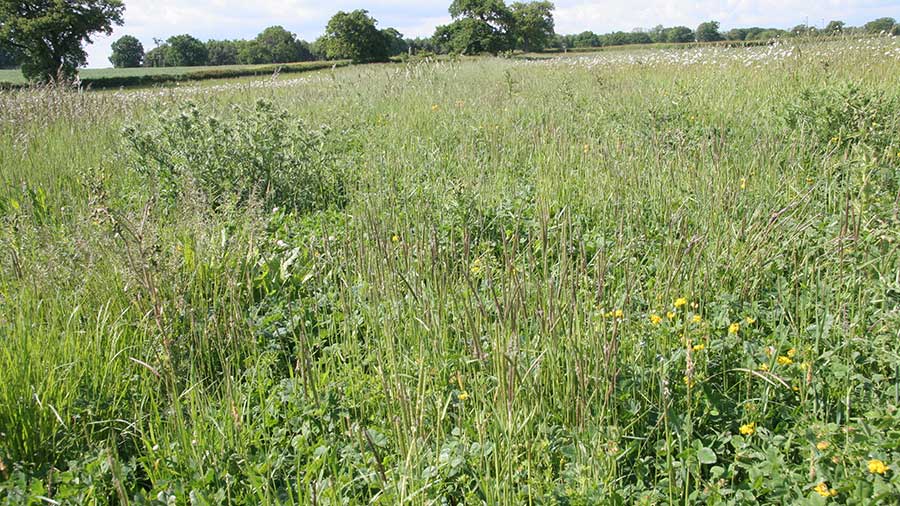 AB15 with no grass in mix © Marek Nowakowski

“As expected, complete control of annual grassweeds in the first year and a good competitive perennial ground cover going into the second season meant both our grass-containing mixes did a very effective job at preventing more blackgrass and brome emergence from the seedbank,” comments Mr Nowakowski.

“Almost 20 times the grassweed population in the no-grass legume mix underlines what I’ve seen consistently in trials dating back to the 2013 ones with which I was involved in developing AB15 in the first place; namely that blackgrass control, in particular, is much more effective if you include perennial grasses.” 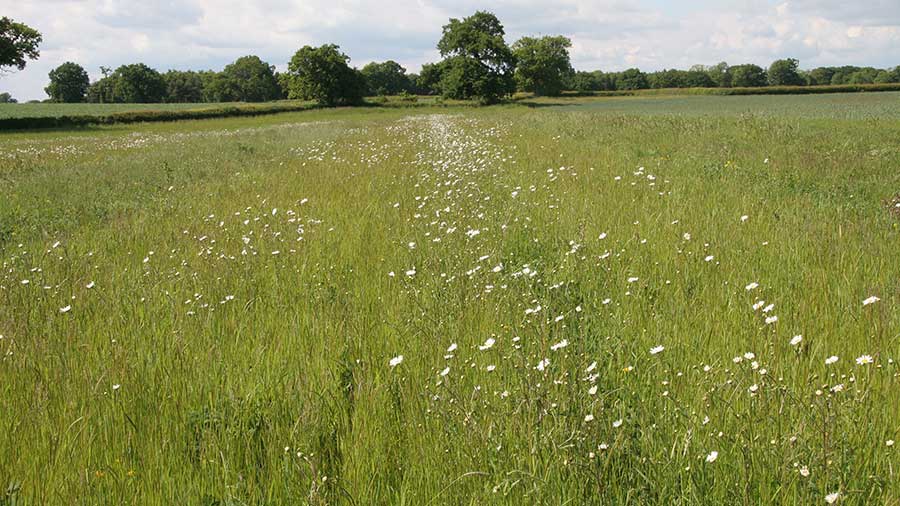 This doesn’t mean you always need grasses in an AB15 mix, adds Mr Nowakowski. Research shows that including them gives you more chance of keeping on top of annual grassweed problems.

“Herbs on their own tend to grow too slowly to develop competitive canopies going into the winter,” he explains.

“This gives far too much space for annual weeds to come through, especially on ground carrying significant weed seed burdens.

“The name of the game with annual grassweeds has to be to prevent them setting seed by repeated mowing in the first year while building up a competitive sward that shuts out further emergence and establishment from then on.”

His latest trials confirm how effective perennial ryegrasses can be at doing this. “But for those nervous about growing ryegrass there are plenty of other grass species we know will do a great job.”

These include the crested dog’s tail, slender creeping fescue, Chewings fescue and smooth meadow grass, which he included in the more effective trial multimix.

“It’s important to appreciate that grasses like these are at least as valuable as many flowers as food sources for a wide range of insects and birds. So, having them in the mix is also an environmental positive.”

Mr Nowakowski has always recommended sowing in first half of August for the best establishment, and broadcasting rather than drilling to give the most even ground cover.

Alongside these he has several other tips for AB15 success.

First and foremost, he suggests those that need to put the maximum pressure on problem grassweeds think seriously about good inclusions of perennial grasses in their mixes.

“Even with the relatively open-structure cross-slot drilling gave at Newton Purcell, we achieved much better blackgrass and brome control with mixes containing grasses,” he stresses.

He says when and how often they are cut in the first year is also key.

As blackgrass re-heads more rapidly after each cut and seeds take a relatively long time to mature and become viable after heading, he would never advise mowing before the end of flowering – generally in late May/early June.

“Holding your nerve like this means two or three mowings should be quite sufficient.

Starting too early – unless you need to help the mix establish in the face of a very dense initial weed burden – could mean you have to cut more than three times to prevent any weed seed return.”

The final, crucial part of the equation in Mr Nowakowski’s experience is getting the following wheat crop into the ground without waking up any remaining grassweed seed.

This may not have been so critical with the five-year duration AB15 was originally designed for, given the extent of the loss of viability of the weed seed reservoir in the ground over this time.

After just two or three years, however, there is likely to be more than enough viable seed remaining.

So the emphasis has to be on spraying-off the mix effectively with glyphosate and direct-drilling the wheat with the least possible soil movement.

How AB15 benefits the environment

The two-year sown legume fallow options (AB15) provide food for farmland wildlife, such as pollen and nectar for pollinators including bumblebees, solitary bees, butterflies and hoverflies.

As well as invertebrate chick food for farmland birds around the sown fallow between April and July, it can also be a useful part of a rotation aimed at reducing blackgrass populations.

Trips and slips to avoid when selling a farm or land

Get to Know This Old-World Sheep Breed