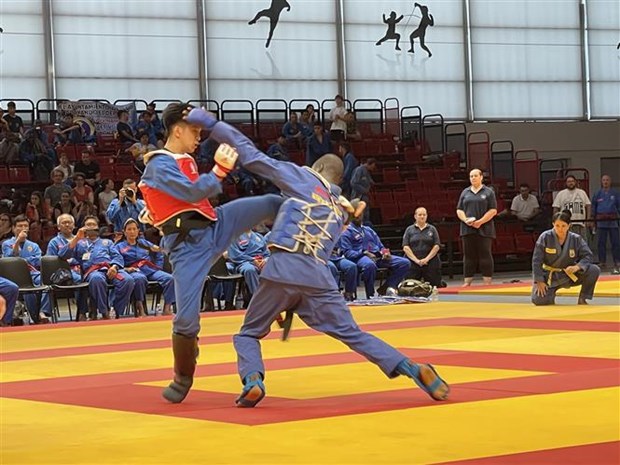 A competition of martial artists at the tournament’s final round. (Photo: VNA)

The event drew 500 martial artists from 15 countries in Europe, America, Africa and Vietnam.

France triumphed at the 6th Vovinam World Championship, bringing home 16 golds, 10 silvers and 15 bronzes. It was followed by Senegal and Belgium.

Grandmaster Tran Nguyen Dao, president of the Advisory Council of the Vovinam-VietVoDao World Federation in France, said that he was surprised by a large number of participants at the tournament.

After two years of being affected by the COVID-19 pandemic, the skills of martial artists in European countries had somewhat decreased, but on the contrary, there was an improvement in those from the African teams, resulting in the number of medals that they got, he said.

Vovinam involves the use of different body parts such as hands, elbows, legs and knees. Trainers also learn to use weapons, including swords, knives and fans. They also practise attacking and defensive skills.

Vovinam began to spread in 1970 and has developed in many countries with hundreds of schools in Poland, Belgium, Russia, France, and ASEAN members./.

Regional conference on food security and income generation through reduction of losses and waste in fisheries in Mauritania.

Regional conference on food security and income generation through reduction of losses and waste in fisheries in Mauritania.