How Kent grower plans to farm with no synthetic N fertiliser


Kent farmer Doug Wanstall has an ambitious plan to cut out all synthetic nitrogen fertiliser in his wheat and oilseed rape crops next season.

To maximise financial resiliency, the farmer has been working to remove as many external forces as possible in his business, since undertaking a Nuffield Scholarship in 2015.

See also: How costs are falling for one regen farmer

To reduce dependency on synthetic fertilisers, he’s determined that building soil biology is crucial as a direct source of nitrogen and to help free-living soil microbes to fix atmospheric nitrogen for crops to use.

Over the past seven years, Mr Wanstall has progressively built a system to allow soil biology to thrive.

He has also started to produce his own sources of nitrogen, which he hopes will allow him to completely cut all inputs of synthetic nitrogen next season.

This season, about 120kgN/ha of manufactured nitrogen has been applied in a little-and-often approach to a milling wheat variety, which he hopes will hit 10t/ha.

“Ear counts and berry size are good, so it’s got every chance, although the heat might mean we lose a little bit off the top,” he says.

In the past, 270kg N/ha has been required to produce a milling quality spec.

“Tests tell us there is plenty of nitrogen, but if we don’t, we know we have saved a lot of money.”

These are the five key areas in Mr Wanstall’s current and proposed nitrogen reduction plans. 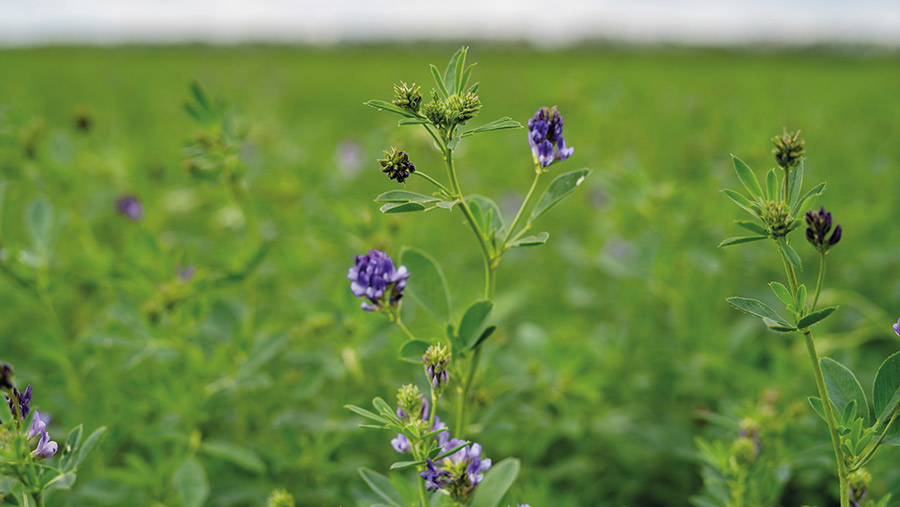 Following his Nuffield travels, he became interested in growing lucerne in an arable system. “It’s a brilliant crop,” he says.

“We grow it for two reasons – one for animal feed, but also its ability to pump carbon down the soil profile, improve drainage and give us free nitrogen.”

It’s grown on about 80ha, usually for three years, while bad blackgrass fields may be down for four years.

Multiple cuts are taken each season, before blackgrass heads, which are used either for home feed or sold locally as hay or haylage.

The market can be a bit feast or famine, he admits, depending on the growth of other animal feed sources.

“But the gross margin is not bad on its own compared with other break crops, and then when you work out the rotational benefits it is very good.”

2. Straw-for-muck deal – with a difference 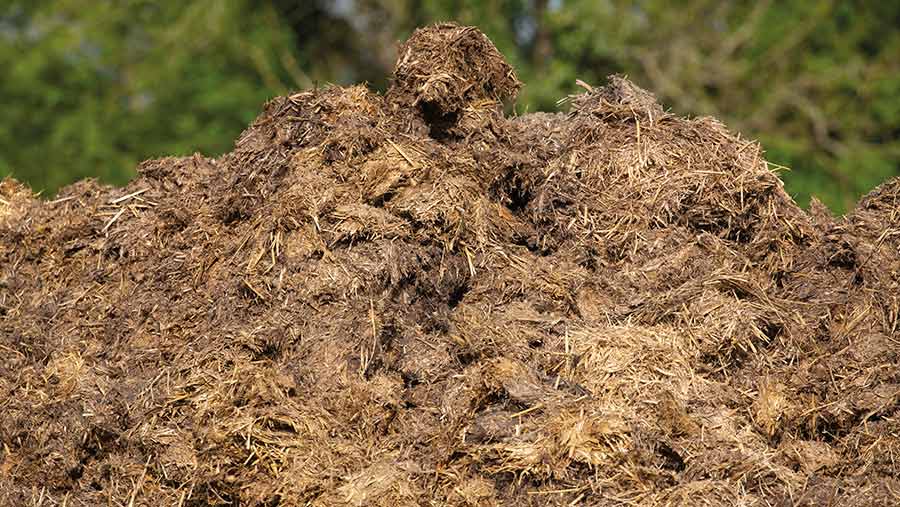 Farmyard muck is composted before use © Tim Scrivener

Mr Wanstall has a straw-for-muck deal with a neighbouring cattle farmer.

Like many such deals, he used to spread the muck relatively quickly after receiving it and saw benefits from doing so.

“But now we are getting a bit cleverer with it to make it work harder.”

That involves composting it over a two- to three-year period, although he only turns a couple of times.

“We’re now applying much lower levels of 5t/ha in the spring into the standing crop with a machine that spreads it 24m,” he says.

It paid dividends last season in a second wheat field which yielded 8.5t/ha, compared with a neighbouring field at only 6t/ha where the only difference was no applied muck.

“The muck isn’t the sum of the nutrient parts,” he says.

“It’s worth far more than that – it’s what it is doing for micro-organisms. It’s giving them carbon sources and food – they are doing the hard work.”

Applying muck in the spring does have its challenges, especially in a wet spring or in taller crops where there might be more damage.

With the clarifications over farming rules for water he’s planning next season to apply 2-3t/ha of the composted muck in both autumn and spring.

“At the current prices of fertiliser, we want to make sure it is on.

“And a little-and-often approach reduces the risk of leaching and makes it more likely the crop will use it.

“It’s all about feeding the microbes, and they don’t need a huge amount – in fact too much might do more harm than good.

“There is nutrition in the muck, but it’s about getting soil life buzzing.” 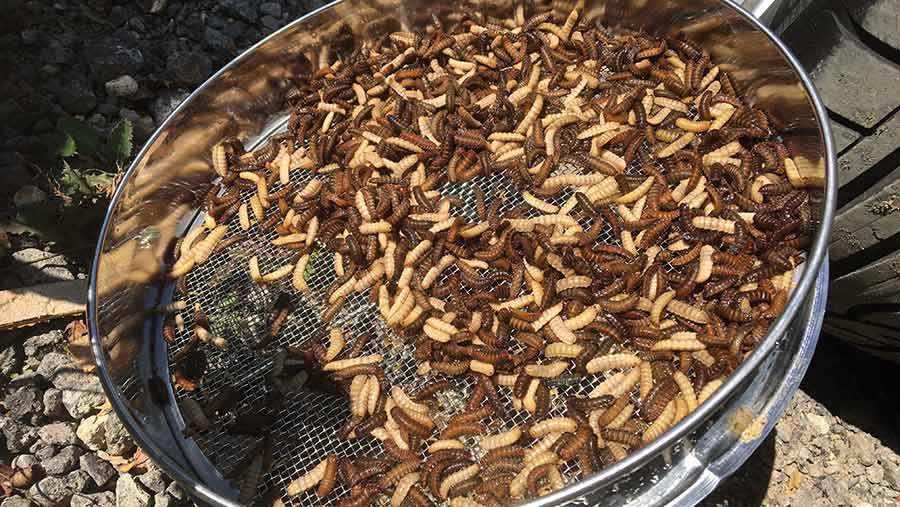 Frass is a by-product from a insect protein business © Inspro

The new addition to the system next year will be frass.

Frass is a by-product of a system developed by Inspro, where fruit and vegetable food waste from a local wholesaler is fed to black soldier fly larvae.

Once the larvae have grown to about 2.5cm, the grubs are fed to Mr Wanstall’s chickens.

The by-product frass is a high-value fertiliser, which he is making into a tea.

It is expected to contain high levels of NPK of about 7:5:5 – which laboratory tests are confirming – plus micronutrients and chitin.

In total, Mr Wanstall is planning to make about 120-150cu m of frass tea, which will be fermented with Actiferm to add more microbiology and make it stable to store.

Chitin acts as a natural insect repellent, so he is going to trial establishing oilseed rape using a flat lift and injecting the frass tea as a starter fertiliser at the same time.

“Hopefully, that will have some effect on repelling cabbage stem flea beetle.”

That rip-and-drip-type application will also be used for cover crops, he says, and then in the spring it will be applied either as a foliar spray or a suspension dribbled on to crops.

“It’s early days, but we think that material will displace all of our remaining nitrogen use,” he adds. 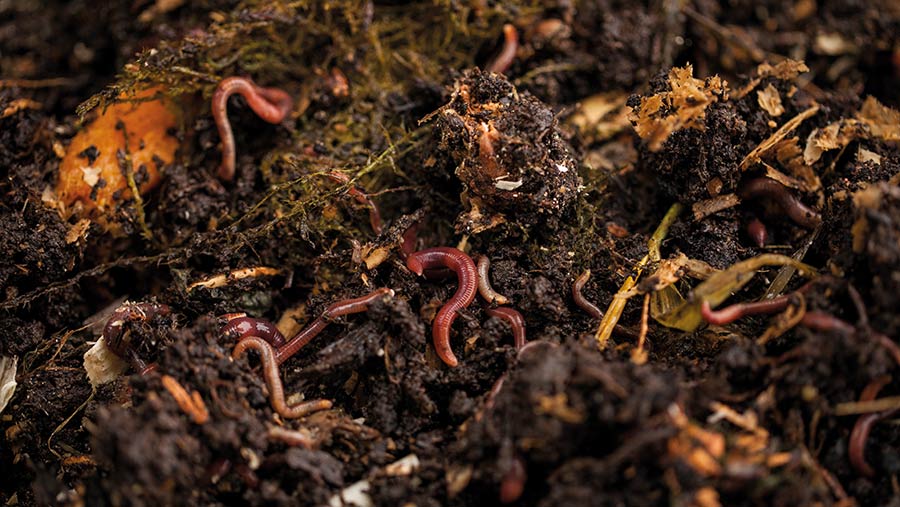 “In the spring, we will flush these through and there should be a fairly significant amount of bacterial and fungal activity. Again, this is about seeding the soil.”

It’s a similar system to that developed by David Johnson for his Johnson-Su compost, but Mr Wanstall says making the extract is a little simpler – just filling the IBC with water and draining through before harvesting the worms to use in future worm farms.

How the extract will be used is yet to be determined, he admits. “We’ll analyse it and then decide where best to use it – it might be that it is best suited to grassland, for example.”

A partnership with the University of Kent to help research regenerative agriculture practices, including a 5ha agroforestry living lab, is proving helpful to understanding how to best use these new initiatives, he adds. 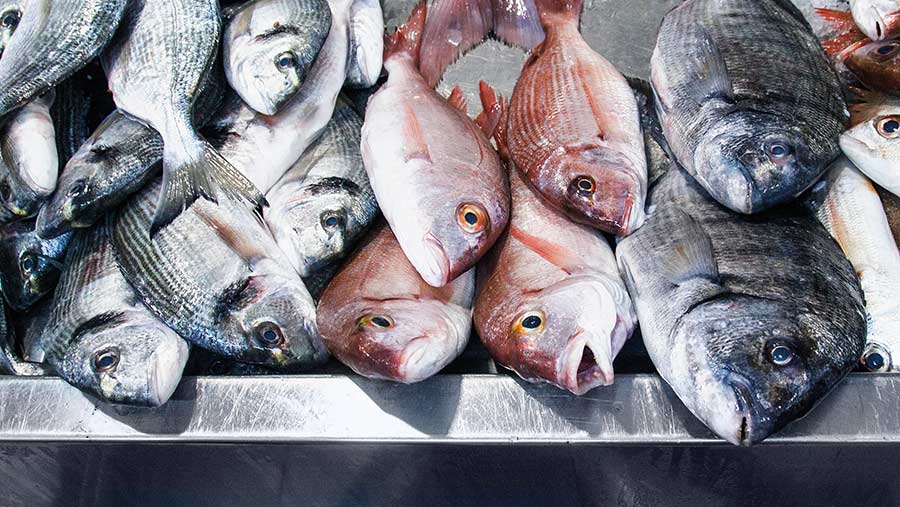 In a similar vein, he is also producing what he calls “Red Bull for soil microbes” from fish waste sourced from local fishmongers.

“It’s a carbon food source for microbes and also contains a lot of trace elements.”

The waste is mashed, and then fermented with molasses and water in tubs. “You end up with this brown liquid, which considering it is fish smells lovely.”

While plans are still to be finalised about how to best use it, he is currently planning to use 1 litre/ha in every pass with the frass tea and fungicides, he says.

Doug Wanstall hopes the many new sources of nitrogen or soil biology enhancers being added next season will replace the remaining applied artificial nitrogen.

However, he will  have one load of bagged N and some foliar nitrogen available to apply if necessary, he says.

“I think we will be brave, although we don’t want to compromise yield.

“The foliar N is a simple fix, which is very efficient, if expensive. It also doesn’t go into the soil which is what we want to avoid as it damages the biology.” 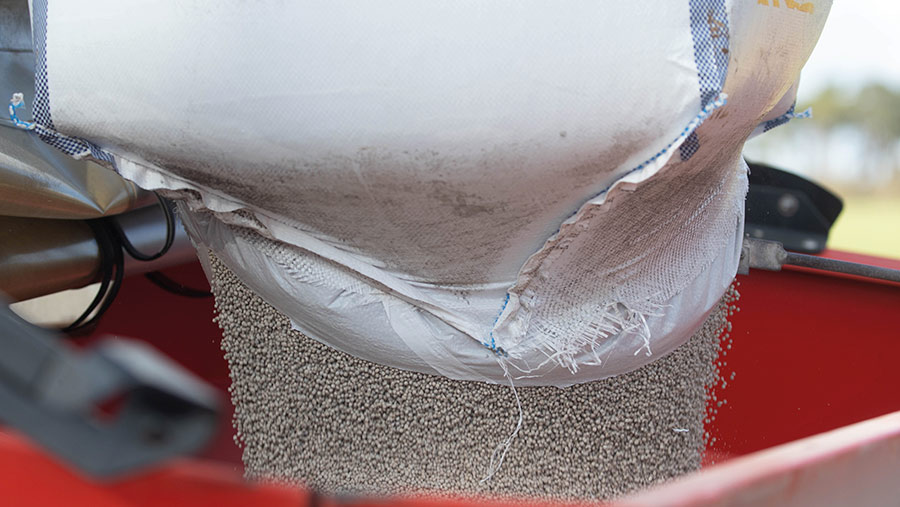 6 Must Visit Cities in Portugal (With Photos & Map)

Take a hike: lessons for the youth