The mystery of South Africa’s missing wine market: the US


Why don’t Americans drink more South African wine? It’s a question that I have been asking myself, and any American wine drinker who will listen, for some time. The world’s biggest wine market was only the sixth biggest importer of bottled South African wine last year, taking fewer than a third as many bottles as the UK, and under two-thirds the number of the relatively tiny Netherlands.

I’m such a fan of South African wine that I’d like everyone to appreciate it. And producers and growers there really do need every bit of financial encouragement to keep vines, many of them venerable, in the ground.

Peter-Allan Finlayson who, along with his brother Andrew, makes the stunning Crystallum wines, was in London recently. He warned that, although grape prices have at last been going up, farmers have found it more financially appealing to grow citrus on the west-coast land that has been increasingly prospected by quality-conscious wine producers and that “even rooibos is more profitable than wine”.

Operating in a decidedly shaky economy, South African wine producers desperately need to export. One bright light for them recently has been China, which seems to have filled some of the gap left after Australian wine was kept out by discriminatory tariffs with imports from the Cape.

It seems, however, as though some canny investors are seeing the potential of South Africa’s undervalued vineyard land. Eben Sadie, an early exponent of the now-fashionable Swartland region, also visited London recently, for the first time in five years. He told me that “lots of money is coming into South African wine now, including from eastern Europe. Buyers can choose between one hectare of insignificant Pomerol or a huge estate in South Africa.”

He is taking a thoroughly proactive approach to these incomers who, one assumes, have very much more cash than any native wine producer. “They’re appointing good consultants, so they get the planting right. But is the winemaking philosophy right?” Sadie adds that if he thinks something is going wrong, he’ll pick up the phone and intercede because “it’s in the interests of us all that they succeed”.

By “us all” he means a tight-knit community of wine producers, all trying to advance exports. Finlayson, for instance, was travelling round the UK in a group of four who, between them, make a total of six brands of wine. I had the pleasure of seeing them with a selection of their offerings in our flat. What was most fascinating was that three of the producers — Finlayson, who makes Crystallum and Gabriëlskloof wines, John Seccombe of Thorne & Daughters and Marelise Niemann of Momento — are very much part of the new wave responsible for reigniting interest in South African wine in the UK. The fourth member of the group, Charles Back, is much more experienced.

Back is a third-generation, 66-year-old wine producer based at Fairview estate in Paarl, which was first planted with vines in 1699. He was an early adopter of Fairtrade, worker-participation, oenotourism, vinification in clay jars. He’s the sort of guy to have been given a Lifetime Achievement Award by the International Wine Challenge at the age of 58.

Yet Back seemed most eager to hear what the younger producers had to say and, when presenting his own wines, confessed that “after 44 years I’ve just realised that owning all your own vineyards is not the best idea. It limits your flexibility and cash flow. I have 550 hectares of vineyard now and I’ve tried to find unusual sites, but it hasn’t been easy.” 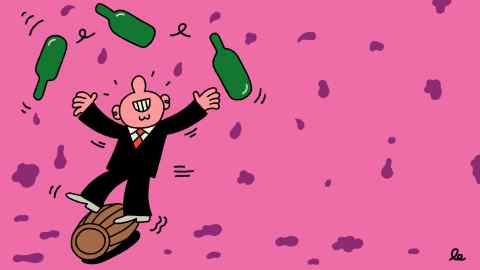 He admitted to all sorts of other mistakes, such as initially making the Viognier he pioneered in Cape vineyards in the 1990s just like Chardonnay, which resulted in “flabby” wines. He also rued what he did when he bought the Swartland farm that would become Spice Route. “I made a big mistake. I pulled out all the bushvines, including old Chenin! I just left the oldest block, planted in 1965, of Sauvignon Blanc. I replanted with Grenache based on my travels in the southern Rhône, and with the prediction of climate change in mind. Grenache is more drought-resistant because the bigger berries absorb more water.”

As we tasted his Fairview Sauvignon Blanc 2021 from Darling, Back explained a special technology he employs to predict exactly which night the grapes should be picked. “Imagine that luxury,” sighed Marelise Niemann who buys grapes from nine growers and 15 vineyards for her Momento label.

She is another huge fan of Grenache, not just red but white too. In fact her best 2021 white is her Grenache Blanc that’s so much zestier than a typical southern French example (but won’t be in the UK until September). “The grapes are so well suited to the South African climate,” she enthused, adding, “especially for the future.” She also produces a fine Grenache Gris, a variety that’s rare in South Africa.

All three of the younger producers in the group have made their wines in the same winery, Gabriëlskloof, which is owned by Finlayson’s father-in-law. Doesn’t that impose a certain uniformity, I wondered, only to be told that Niemann and Seccombe once made wines from exactly the same lot of juice from the press and they turned out completely differently.

Seccombe’s Thorne & Daughters wines have a particularly distinctive character. He is not especially interested in powerful aromas but goes for understated elegance and drive on the palate. He also has a grey (gris) speciality, Sémillon Gris, a variety that’s even rarer than Grenache Gris, though it is not recognised by the South African wine authorities so the wine has to be labelled simply Sémillon.

It was interesting to hear about their concerns; above all, sustainability in an era of climate change. They pointed out that, in the winery alone, it takes between six and eight litres of water to produce a litre of wine, without taking any irrigation into account (though Swartland vines tend to be dry-farmed). But the move away from obviously oaked wines has apparently resulted in a national shortage of used barrels.

Seccombe studied at Plumpton College in England with winemakers at the celebrated English wine estates Gusbourne and Hattingley, so is very familiar with South African wine’s number one market. Both he and Finlayson had recently been to try to sell their wine in the US. According to one of them, “the US sommeliers are now aware of South African wine”. Though the other added ruefully, “even if there are only about 800,000 cases of it in the whole country”.

Five Things You Need To Know About The Embattled Musician