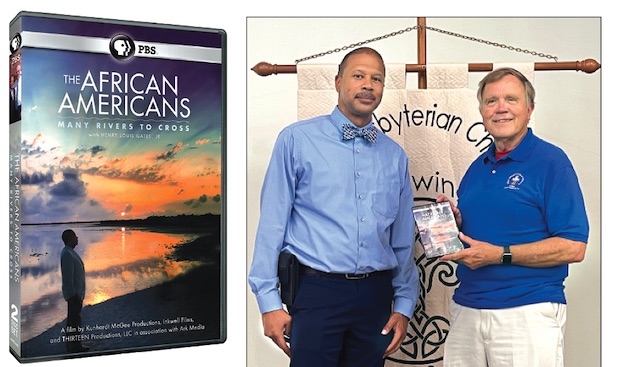 The Lake Charles First Presbyterian Church will be hosting a six-week program based on the Public Broadcasting Service’s (PBS) original series “The African Americans: Many Rivers to Cross.”

The Sunday evening series will be facilitated by church members Leonard Knapp and Willie Bellard.

“I look at the church’s role in activism and the responsibility of a Christian community to encompass and bring in all view points and aspects of a community,” Knapp said. “One of the things that bothered me a great deal as a result of the shootings by the police was the failure of people to communicate.

“We tend to look at people as Blue or African American. I think that the Christian community is more than that, I think that you need to have a broader perspective.”

Through these discussions, they came to the conclusion that the only way to bridge the gap between racial groups is to provide a space to have open and honest conversations with the intention of understanding.

The integration of the docuseries, “Many Rivers to Cross,” was introduced by Bellard himself. Over the course of six weeks, participants will explore the comprehensive history of the African American experience and discuss how that history intersects with Christianity and religious service.

“I hope that by showing this, and then talking about it, we might be able to get some insight into the shoes of the other members of our community,” Knapp said. “I think it’s important that we have a dialogue.”

For Knapp and Bellard, understanding is the root of progress. Bellard referenced Stephen Covey’s “The Seven Habits of Highly Effective People.” He believes that Habit 5, “Seek first to understand, then to be understood” is important for this conversation.

According to Bellard, the first step to truly understanding someone different from you is to first know the history of their heritage and injustices.

“The key is that we want to try to understand where someone else is coming from or what their perspective is,” Bellard said. “I’m a firm believer that if you don’t know your history, you’re bound to repeat it. There are some aspects of history that tend to come up over and over again.”

“We see some of that happening now. Some of the things that have happened in the past can explain some of the emotions that people are experiencing today, or at least some of the reactions that people have. A lot of it has to do with past experiences or historical events that have taken place,” he said. “When we don’t really know what those experiences were or what those instances were, then it makes it hard to understand why the reaction today is so strong.”

Knapp has found himself grateful for this opportunity to provide understanding for others. Through this series, he hopes to give locals access to perspectives that were not available to him when he was younger.

“Growing up in the Lake Charles community, I just didn’t have an African American perspective, and I thought that was important to learn and to view,” he said.

“The history that we look at has a lot of the same issues that are just repeated. The goal is to communicate, talk, and at least understand the viewpoints of each of us.”

This limited worldview is something they hope to broaden. “Part of our goal is to understand the past, and then to see how that past is impacting our present,” explained Bellard. “We also want to look at how we can help the future. How do we make the future better?”

Seeking understanding through Christianity is a natural practice for the church. “From a Christian perspective, Jesus taught us that the two most important commandments are to love God, and to then love your neighbor as yourself,” explained Bellard. “One of the ways that we love our neighbor is to get to know our neighbor. It’s hard to love someone from a distance.”

He continued by explaining that throughout history, the church has always been an instrumental voice, whether positive or negative, for the issues of race.

“When you think about the civil rights movement, a lot of the leaders were ministers. Dr. Martin Luther King and many other ministers came together to try to lead civil rights events and to bring equality,” he said. “Ultimately, their relationship with God and Jesus Christ is what motivated them to want to bring about justice and equality in a peaceful way.”

“I think it is instrumental to try to bring things about peacefully, as opposed to through violence and fighting,” he continued. “A lot of churches were always instrumental in trying to make the relationships between the races better.”

Historically, Christianity has played an active role in African American history. “It absolutely is a part of it from the very beginning with the idea of slavery,” explained Knapp. “The outlawing of slavery was aided through the churches and the evangelical , movement that was occurring in the late 1700s and early 1800s.”

“So, it has been a part of religious discussion for a long time.”

“It has been a part of this denomination and many denominations. You still see some of that same division going on in different congregations. It may have different connotations, but it stems from the issue of different people coming together.”

Knapp believes that the strength of American society is our diversity. Because of this, it is important for citizens to try to “walk in the other fella’s shoes” and understand them.

“When you start studying the African American experience … it helps to understand and get the feeling for really what and who your neighbor is, and our goal is simply to think, and let people think through some of the issues and how perspectives may differ,” he said.

This is the church’s first outreach program to encourage discussions on race. For them, the conversations that will take place after the viewings are the most vital part of this program. “This will create a platform where we can discuss things, and just have an opportunity to understand these perspectives and have discussions that will hopefully lead to other discussions.”

Bellard emphasized that their main goal is to simply start a dialogue. “We want to create an understanding of how our history unfolded and has an impact on our present situation. Then, how that discussion can lead to a better future and improve future communities.”

Knapp is a senior member of the congregation and a Presbyterian church session member. He is also a former Calcasieu Parish district attorney. “I bring a law enforcement perspective and a church member perspective to bring into this conversation,” he said.

The series that will be shown over the course of six weeks is “The African Americans: Many Rivers to Cross.” The show was written and presented by Harvard University professor Henry Louis Gates Jr. and originally premiered on PBS from Oct. 22 – Nov. 26, 2013. “Many Rivers to Cross” is the recipient of the 2014 Peabody Award, 2014 News & Documentary Emmy Award for Outstanding Historical Programming – Long Form, and the 2014 NAACP Image Award for Outstanding News/Information.

The series covers African American history from 1500 to 2013. This program will present one episode a week, with a period of discussion following the viewing.

The first night in this series will cover the first episode of the docuseries, “The Black Atlantic (1500-1800)” will explore the very beginnings of the African American canon.

“The first one is on slavery,” said Knapp. “We are going to look at it not only from the point of view of the United States, but also from a Worldwide perspective.”

This video-informed discussion group is open to the public and kid friendly. Locals who are not a member of the church are encouraged to participate in the program and join this conversation on religion and race.