Two new Group 2 milling winter wheat varieties are being grown on one Kent farm, with both Mayflower and Palladium looking good ahead of harvest, and Mayfield so far a little cheaper to grow.

Edward Batchelor and his sons, Andrew and Ryan, focus on milling wheats and are growing the two varieties on seed contracts. They will be assessing yield, and grain quality at harvest to see if they will be drilling them commercially next season.

Mayflower is a slightly taller variety than Palladium, and appears to have more green leaves. Both looked clean of disease just ahead of harvest in their area of north-east Kent, which can see yellow and brown rust quickly hit wheat crops.

“Both look good at the moment and both appear like good varieties, so we are likely to grow both again next season. We saw Mayflower in trials and, looking at the untreated fungicide plots, you would have thought it had been treated with a fungicide,” says Andrew.

He was impressed by the variety’s disease resistance characteristics in trials last season and, with many Group 1 milling wheat varieties under pressure from diseases – Skyfall and Zyatt are susceptible to yellow rust and Crusoe to brown rust – the farm decided to grow a seed crop of Mayflower for agronomy and grain trading group Frontier.

The family farm has 40ha of Mayflower in the ground on their 600ha of largely arable land at Ford Manor Farm, north-east of Canterbury.

The farm has grown Group 2 wheats such as Siskin and Cordiale in the past, with Extase currently grown. The family choose a range of Group 1, 2 and 3 wheat varieties to spread the risk, says Edward.

Among the Group 2s, Extase has become the benchmark variety for its high yield and good septoria and rust resistance, but Edward says Mayflower’s untreated fungicide plots looked even cleaner than Extase, so they were keen to try the variety. 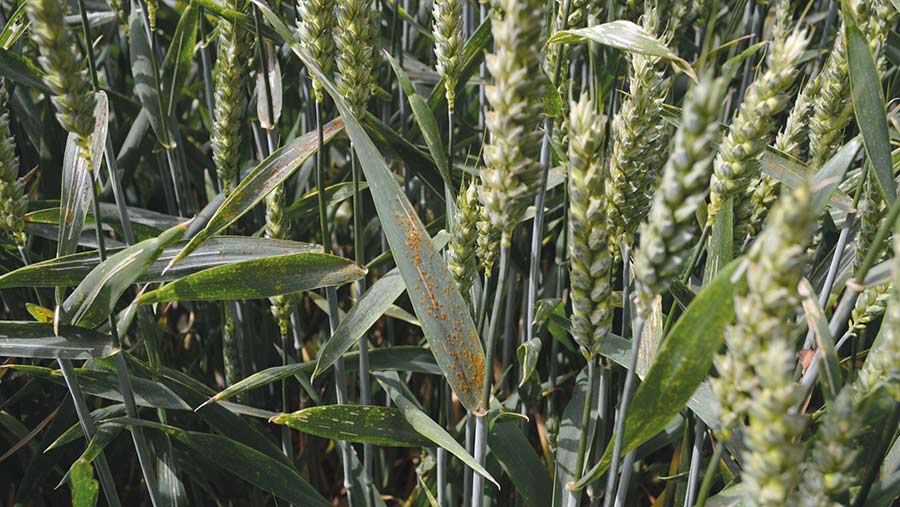 The 40ha of Mayflower was drilled in the second week of October, along with 35ha of Palladium, and both grew away at similar rates. However, the Mayflower developed into a taller and leafier wheat with a dense green canopy, perhaps 50-75mm taller than Palladium.

As seed crops, nitrogen fertiliser was applied at a relatively modest 220kg/ha, compared with Skyfall and Illustrious commercial crops at 260-270kg/ha and Extase at 280-300kg/ha, when aiming to achieve 13% protein.

Both Mayflower and Palladium will be tested after harvest to check grain protein levels.

Traditionally, millers look for a protein content of 11.3-11.5% for Group 2 wheats, but some have paid the full milling premium for varieties such as Extase that meet the 13% criteria.

The T1 treatment was common across the two varieties, consisting of SDHI benzovindiflupyr plus azoles prothioconazole and tebuconazole.

For T2, the planned Univoq had to be quickly cancelled after reports of sprayer damage from the fungicide, and a less expensive prothioconazole-tebuconazole-folpet mix was used instead due to dry conditions. Both had a T3 azole ear spray of  prothioconazole and tebuconazole, as did the Extase.

Mayflower shows the second-highest septoria resistance on the AHDB Recommended List, with a one-year resistance score of 8.2, after Theodore’s 9 and ahead of Palladium on 7.2 and Extase on 7.3.

This is on an AHDB 1-9 scale where 9 shows good resistance and 1 is very susceptible.

Both Mayflower and Palladium score 9s for yellow rust resistance, while Mayflower has a 6 for brown rust, slightly above Palladium’s 5. 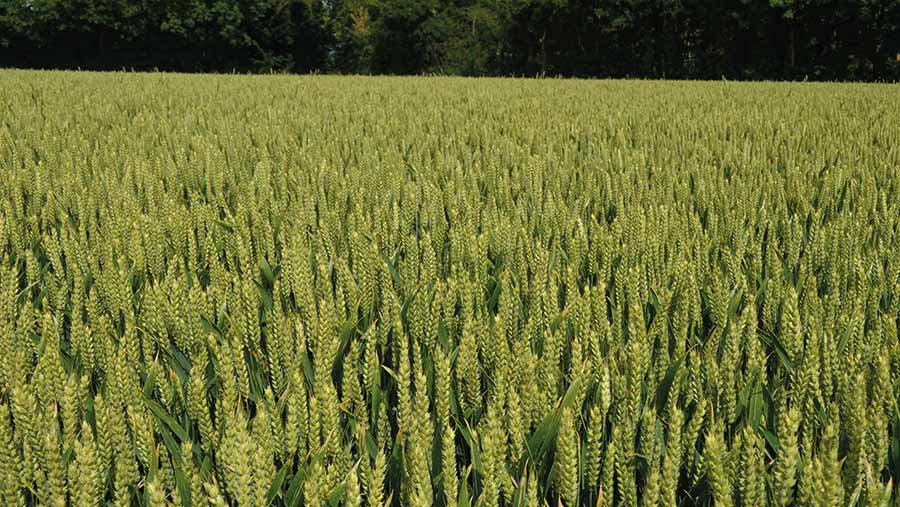 Paul Taylor, head of agriculture at seed group Elsoms, which bred Mayflower, says the variety appears to take up more nitrogen fertiliser and capture it early in the season, and then use the nitrogen more efficiently.

When applying 85kg/ha early in the season, it performs well and goes through its growth stage quickly, he adds.

“The variety seems to have greater nitrogen efficiency compared with other wheat varieties we have seen in our trials,” he says.

Mr Taylor adds that the variety has performed particularly well in breadmaking trials, and the breeder is hoping to get the variety upgraded to a Group 1 milling wheat.

With Group 1 specialist milling winter wheat varieties’ share of the market slipping below 20%, the Group 2 varieties may see increased interest from the millers.

Mr Piggott adds that Mayflower has “fantastic” disease resistance, and it is good to see diversity in its parentage compared with a lot of other wheat varieties on the AHDB Recommended List. The variety also has a particularly good specific weight, similar to Extase, at 78.5kg/hl.

He concludes that between the two, Mayflower may have the edge on specific weight, while Palladium leads on straw stiffness, but both look like good varieties overall.

Palladium’s breeder, KWS, says there will be enough seed available to take 3% of the seed market this autumn, while there is likely to be less Mayflower seed  available for drilling.

Russia-African Relations in the Context of Geopolitical Changes

Russia-African Relations in the Context of Geopolitical Changes