Boris Johnson has accused detractors of his Rwanda deportation policy of having “condescending attitudes” towards the African nation, as the prime minister said he hopes to use his visit to Kigali to change minds.

Mr Johnson said Rwanda‘s hosting of the Commonwealth Heads of Government meeting (CHOGM) was “an opportunity for us all to understand what the partnership has to offer, what Rwandans have to offer, and help to shed some of those condescending attitudes towards Rwanda”.

The prime minister, joking that he was conscious that he was arriving in Kigali before “anybody who has travelled illegally across the Channel”, insisted that the policy was a good idea.

His remarks come after weeks of conflict over this policy, culminating in the first scheduled flight being grounded after a last-minute intervention by the European Court of Human Rights (ECHR).

The government subsequently announced its intention to introduce new legislation in the House of Commons in an attempt to dilute the influence of the ECHR in British cases.

One alleged critic of the Rwanda refugee policy is Prince Charles, who reportedly told friends that the decision to deport asylum seekers to Rwanda was “appalling”.

The Prince of Wales, who is representing the Queen for the first time at CHOGM, is due to meet with the prime minister on Friday for a cup of tea, in what could prove a rather awkward meeting.

Mr Johnson downplayed the split just before he departed for Kigali, telling reporters that he had “no evidence for the assertion…about the prince’s comments”.

“It’s a plan to deal with the grotesque abuse of people crossing the Channel,” he insisted, “and it hasn’t been ruled unlawful by any court.”

Rwanda: What is the government scheme?

But the prime minister could face further questions about the policy during his three-day visit to Rwanda, given that the UK has put on record its concerns about human rights in Rwanda to the United Nations.

In January 2021, the British government expressed concerns over “continued restrictions to civil and political rights and media freedom”.

The UK also urged Rwanda “to model Commonwealth values of democracy, rule of law, and respect for human rights.” 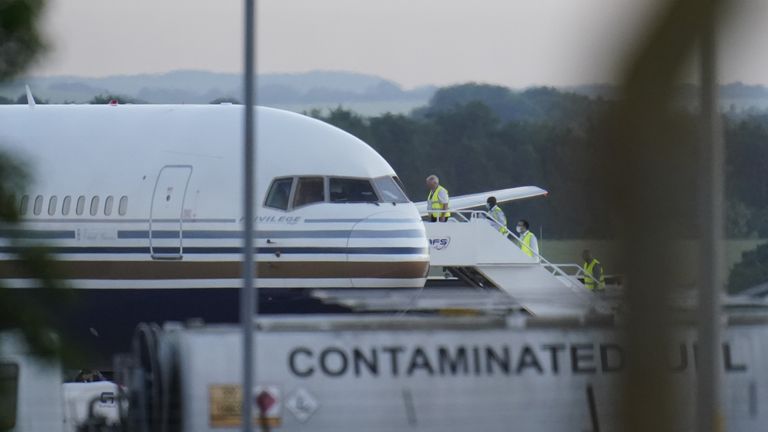 For the prime minister, the Commonwealth summit kicks off a triumvirate of key events over nine days of international diplomacy, which he hopes will offer an opportunity to repair his authority and status following the confidence vote in him earlier this month.

From the 54-strong Commonwealth nations summit in Kigali on Thursday, the prime minister will then travel to Germany on Saturday to meet with G7 leaders, before ending his tour at the NATO meeting in Madrid.

There is much to cooperate on, with the PM keen to use these summits to focus on the international diplomatic and military response to the Ukraine war, with food security a theme likely to run through all three gatherings as leaders grapple with the complexity of trying to export crops in the midst of the conflict.

He is expected to use high-level meetings to warn against fatigue over the war as the conflict drags into its fourth month with no end in sight. Mr Johnson is arguably Ukrainian President Volodymyr Zelensky’s closest ally and will want to use these meetings to press his case.

But there are tension points too beyond the Rwandan deportation scheme. The prime minister heads to meetings with European allies and the US with Brexit divisions very much back on the agenda.

At the G7, the prime minister will be meeting fellow European leaders German Chancellor Olaf Scholz and French President Emmanuel Macron, as well as European Commission President Ursula von der Leyen, for the first time since the government tabled legislation to overwrite parts of the Brexit treaty it signed with Brussels in 2020 and the EU in turn restarted legal action against London.

It’s all a little deja vu: tensions over Northern Ireland trading arrangements overshadowed last year’s G7 summit in Cornwall – also drawing in the US – and could do so again.

Ahead of last year’s meeting, US President Joe Biden ordered officials to issue Mr Johnson with an extraordinary diplomatic rebuke, accusing the UK of “inflaming tensions” in Ireland.

Striking deals and forging alliances over the conflict in Ukraine did well for the prime minister in the first quarter of the year. But the long-running conflicts over Brexit have flared up just as Mr Johnson returns to the global stage, and it will take a real dose of diplomacy from him not to let those divisions ruin this attempted reset.

Flying animals to safety for 20 years