Sounds from the streets of Nairobi emanate from a hut at the entrance of the documenta hall in Kassel, Germany. Nearby, an artist has put up a tent that claims to be the embassy of Australian Aboriginal people. This year’s documenta contemporary art show is both unapologetically colorful and very political.

“We’re taking a trip around the world,” says one documenta visitor — and that’s exactly what the organizers wanted.

Around 1000 artists, primarily from Africa, Asia and Latin America, are taking part in this year’s documenta, which takes place every five years. Their ideas, perspectives and stories will be shaping the city of Kassel in the German state of Hesse for 100 days, from June 18 to September 25.

Traveling around the city and the world

The 32 exhibition venues are spread all over the city. The focus this year is less on individual works of art and more about processes and projects. It’s an opportunity for artist collectives to shine, not big names. Documenta 15 was curated by Indonesian artist collective Ruangrupa. They selected participating artists and asked them to address topics such as refugee rights, collaborative participation and the power of communities working together.

Their guiding principle is called “Lumbung,” and it’s based on an Indonesian concept of a rice barn where surplus harvest is stored and distributed communally for the benefit of all.

Inspired by the concept, the Berlin art collective ZK/U (Zentrum für Kunst und Urbanistik, or Center for Art and Urbanistics) built a boat out of an old wooden gable roof that belonged to the group of artists, architects and curators. The vessel, which is called “citizenship,” is sailing from Berlin to Kassel along Germany’s waterways in a journey that will take 60 days. It’s one of the many unique projects associated with this year’s festival.

The center of the action

One of the groups involved is Another Roadmap Africa Cluster, who describe themselves as an international network “of scholars and practitioners of artistic and cultural education who are working in both formal and informal contexts within the African continent.”

“Our message is that Africa has more to offer than the colonial or Eurocentric narrative. We want to take control of that ourselves,” says Lineo Segoete of the group.

On the first floor of the neoclassical building, one can find the “Gudskul,” a living and working space for the collectives. With a little luck, visitors may find them working, cooking, chilling or perhaps singing karaoke.

There’s also artwork on display, like the large paintings by Australian Richard Bell hanging on the walls upstairs. The Indigenous activist is perhaps the best-known artist at this year’s documenta.

“I want our message to reach the northern hemisphere, the countries that colonized most of the world,” he told DW. “They are the beneficiaries of the plunder. But now comes the time of reckoning.”  Bell’s work often touches on colonial themes and is critical of Western art production. 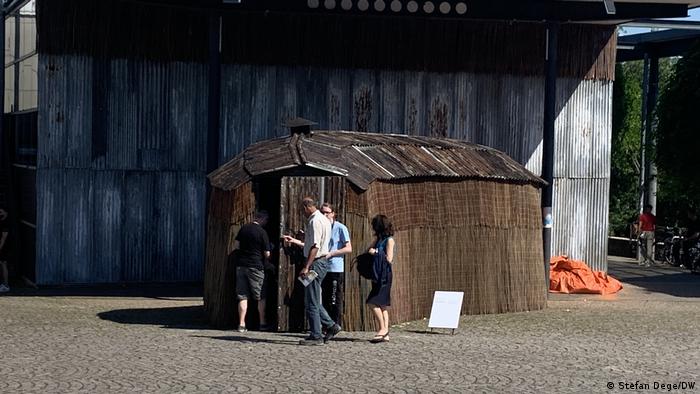 The path into the documenta hall leads through a tunnel-like structure made of rusting corrugated metal. From here, Lazarus Gachanja of the Wajukuu Art Project blares street noise from Kenya’s capital, Nairobi. “This is the community, the place we come from,” he told DW. “What you don’t see is the crap that happens to us. Still, we like the street we live on.” 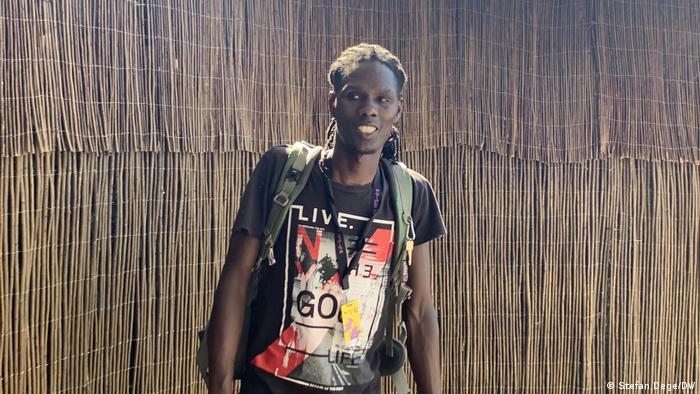 Inside the hall, two sculptures float belly-up in a cocoon of twigs above a pile of sand that conceals a mirror. The INSTAR group from Cuba document how their country’s government treats critics.

INSTAR founder Tania Bruguera says there are currently some 1,500 political prisoners in Cuba. Their only crime, she says, was to have voiced their own opinion. “We want to make it clear to the world that good weather does not equate to good government,” she told DW. When asked if she finds art a viable means of political struggle, her answer is succinct: “Art is perfect for that, isn’t it?”

A disused indoor swimming pool is home to the work of the Indonesian collective Taring Padi. The group’s work is a retrospective of the last 22 years. Using wall-sized paintings and printed flags with figures and objects, they make a chilling statement on the massacres that dictatorial president Haji Mohamed Suharto was responsible for during the time he led Indonesia between 1967 and 1998. It is estimated that millions of people lost their lives under his regime. 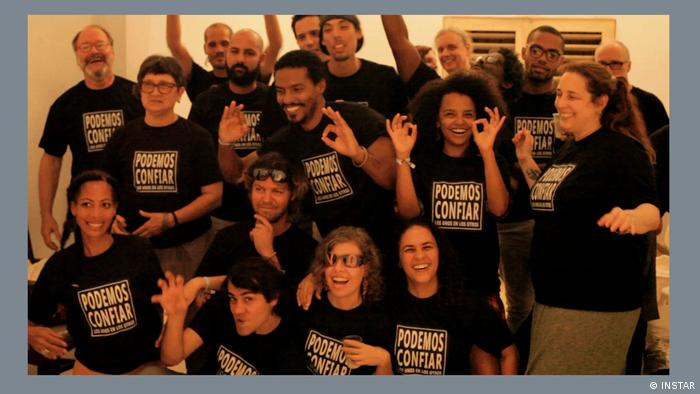 In their documenta contribution, Cuban artist collective INSTAR focus on how their government has silenced critics

It’s all but impossible to bypass the documenta location known as WH22, a former club and bar not far from Kassel’s train station. It is there that the Palestinian group The Question of Funding set up a gallery space, igniting a debate about antisemitism that has overshadowed the documenta up through its opening.

The curatorial team has rejected allegations that the collective invited anti-Israeli and antisemitic artists. The debate has drawn in voices from the highest levels of German politics, with the Central Council of Jews in Germany also weighing in.

Israeli artists were not invited to this year’s documenta.

German President Frank-Walter Steinmeier said he would address the topic of artistic freedom and its limits in his opening speech at documenta. “Art must provoke dialogue and discussion,” he said in recent days. “But it is just as clear that debates, contributions and messages can also have limits. There is a need to talk about these limits.”

The documenta’s general director, Sabine Schormann, told DW that the antisemitism debate needs to “actually be uncoupled from documenta.” Now is the time for the art to speak, she added. 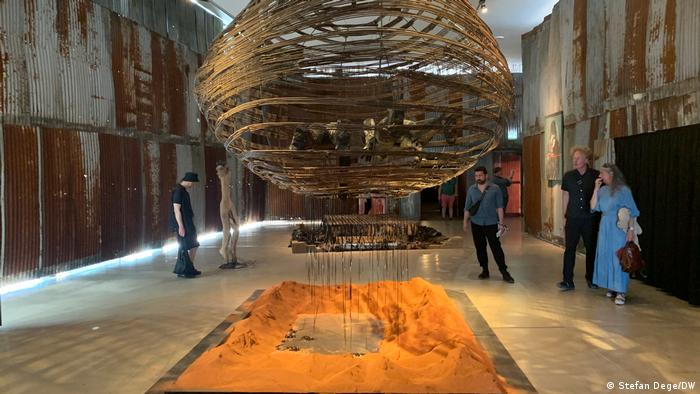 This year’s documenta is decidedly political, which is reflected in works by African collective Wajukuu Art Project

Mohammed Al Hawajri is one of the artists in the Palestinian collective The Question of Funding.

His series “Guernica Gazes” combines images of incursions by the Israeli army into Palestinian territories with classical motives from artists such as Delacroix, Chagall and van Gogh. Al Hawajri’s title references Pablo Picasso’s painting “Guernica,” which he created in 1937 in reaction to the bombing of the Basque city of the same name by Nazi Germany’s Condor Legion at the wishes of the Nationalist Spanish general Francisco Franco during the Spanish Civil War.

The many discoveries of the documenta continue in the giant Karlsaue park, with an installation called “Return to Sender” by The Nest Collective, a Nairobi-based group. The giant structure covered with old textiles and electric waste highlights the destruction of the environment and markets in African countries.

Documenta fifteen ends on September 25. With so much to see, 100 days may not be enough.

This article was originally written in German.

Policy Powerhouse launches the fastest holiday let insurance quote platform in the UK, for purchase in under 5 minutes

Interactive: How much will you pay for insurance on the Health Insurance Marketplace?