Israelis and Palestinians have spent 75 years immersed in a complex dispute about international law, sovereignty and human rights. How can 21st-century American students grapple with the divergent narratives on religious, cultural, historical and political tensions in this conflict? Moreover, how can this conflict involving the Middle East’s only liberal democracy help future professionals develop the knowledge and skills to lead through global challenges?

This was the focus of the Global Intensive Experience in Israel and the West Bank offered by the School of Civic and Economic Thought and Leadership to 14 Arizona State University students. From May 10–19, they explored the multifaceted challenges that face this strategic region and Israel as an important U.S. ally, met with Israeli and Palestinian representatives, practiced servant leadership and reflected on the common threads between the liberal democracies of Israel and the United States. 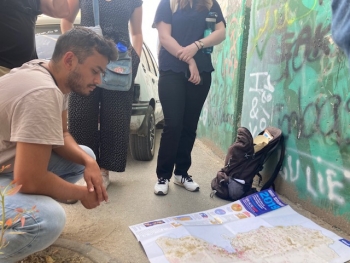 “It was both fascinating and confusing to hear the different viewpoints of the people that our group spent time with,” said Avi Kapur, who is pursuing a minor in civic and economic thought and leadership at ASU.

Kapur was among the students in this three-credit learning experience that is part of a series of courses in the school about liberal democracies around the world. This GIEGlobal Intensive Experiences course is an invitation to ASU students to assess their own views about democracy, conflict, civil disagreement and citizenship through a blend of readings, meetings with Israeli and Palestinian leaders and activists, and immersive experiences.

“Our goal is to expose ASU students to — and invite them to engage with — global challenges related to civil dialogue and the workings of democratic institutions,” said ASU Clinical Assistant Professor Susan Carrese, who has led this GIE course since 2018. “By encountering political polarization and conflict in another liberal democracy, American students can gain insight into our own domestic challenges and become aware of the global conflicts that command the attention of thoughtful citizens.”

During the 2022 GIE program, students deepened their understanding of the Israeli-Palestinian conflict as they visited key sites in Tel Aviv, Bethlehem and an Israeli settlement. Students practiced and promoted civil dialogue in conversation with a wide range of political and religious leaders. Before embarking on the plane and throughout their stay in Israel, ASU students were invited to learn about the liberal democratic order in  Israel and the specific challenges that everyone in the region faces when immersed in disputes of such magnitude.

“That is one thing about Israel: We try hard to fit everything into a dichotomous narrative. The secular versus the religious, the young versus the old, Israel versus Palestine, but despite these classifications, the people we met and learned from revealed that it is much more complicated.”

— Clay Robinson, a junior at Barrett, The Honors College majoring in civic and economic thought and leadership

Beyond the readings, the cohort interviewed political representatives and nongovernmental organization leaders from opposing sides, including veterans of the Israeli Defense Force, Orthodox and liberal rabbis, the chief imam of al-Aqsa mosque, a Likud party (the major right-wing political party in Israel) politician and a Palestinian farmer, among others. The goal of the course is to remind students of the importance of attentively listening to all sides, carefully examining the arguments and working toward developing their own informed judgments.

The importance of civil disagreement during polarizing times

Mark Habelt is pursuing a major in civic and economic thought and leadership. For him, an important takeaway from the course is a lesson on carefully considering different perspectives.

“I learned that the heart of democratic citizenship is about intentionally listening to those with whom you disagree in order to understand the basis of their viewpoints,” Habelt said.

“Civil dialogue requires that we acknowledge that everyone comes from different religious, economic and familial political backgrounds and therefore has developed a complex worldview that is well-intentioned and thought through. In a plural society, it is never acceptable to vilify your political opponents without fully hearing out their thoughts on various issues and understanding the fundamental bases of their opinions,” Habelt added.

Confronting diverging narratives outside of the American political environment served its purpose. During the immersion part of the course, students had a chance to develop new takes on what it means to listen to opposing views. For Kaleigh Steele, a data science major and School of Civic and Economic Thought and Leadership minor, this had a profound meaning.

“Civil disagreement doesn’t require you to change your mind, but it does require you to examine your beliefs in light of what someone else says,” Steele said.

Before going to Israel, Steele had a much different interpretation of civil disagreement.

“Prior to this trip, when I said someone should act civilly I really meant they should be polite. Civility was synonymous with common courtesy. So while I’d never really been pressed on the matter, I suppose civil disagreement means disagreeing without screaming or fighting. After this course, I would like to amend that. Civil disagreement is not simply allowing someone to speak and disagreeing in a polite manner; it includes genuinely considering someone’s point of view even if you disagree with them,” Steele said.

For Clay Robinson, a junior at Barrett, The Honors College at Arizona State University majoring in civic and economic thought and leadership, learning about the conflict in the Middle East was eye-opening.

“Part of civil disagreement in Israel in the West Bank begins with an understanding that the disagreement is not an ‘us versus them’ situation but a ‘this versus that,’ but also ‘this, don’t forget that’ situation,” Robinson said. 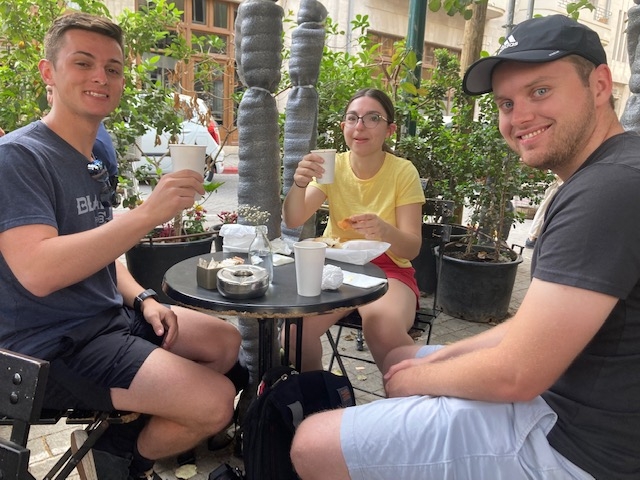 During the trip, Arizona State University students learned about the multifaceted challenges that permeate the Israeli-Palestinian conflict, practiced servant leadership and explored cities in Israel and the West Bank.

The discrepancy in narratives became evident during their immersion in Israel. On May 11, Shireen Abu Akleh, a 51-year-old Palestinian-American journalist working for Al Jazeera, was killed during a clash between Israeli forces and Palestinians in Jenin. Her funeral in East Jerusalem became the dramatic scene of a further violent clash between the two sides.

Kapur said he came to wonder “how a state could function properly without there being some accepted version of the facts.”

“The dilemma reminded me of the disconnect in American politics between the right and left, yet it felt deeper and more pronounced in Israel,” he said. “The interpretation of police intervention during the processions also showed the difference in narratives.

“It’s hard to see any agreement on a set of facts from this event. Instead, each side picks out certain aspects of the incident and morphs them into their overall narrative. … I learned that civil disagreement reflects both the cold, hard reality and the narratives pushed by opposing sides … there are more than two sides in civil disagreement.”.

Each year during this course, the cohort works on a project that inspires a deeper sense of reward that comes from leadership and community belonging. This year, students and faculty literally rolled up their sleeves for the common good. They volunteered at a Tel Aviv community garden and at the Tent of Nations farm in the West Bank. Growing food and planting trees reminded students to focus on hope and resilience.

Habelt saw the work they’ve done at the Tent of Nations as a demonstration of solidarity with the Palestinian farmer who was locked in a 32-year legal dispute over his right to the land his family purchased under the Ottoman empire.

“The farmer explicitly aimed to become neither an enemy nor a victim of the Israeli state,” Habelt said, “but rather to live as an empowered global citizen with certain fundamental human rights that ought not to be taken away. He achieved this by fighting for his land rights through the Israeli court system and proactively drawing attention to his plight by founding a nonprofit. The farmer’s efforts toward setting an example of the benefits of peace and legal action, rather than reactionary violence, served as a powerful example of servant leadership.”

Kapur spoke about the connection to resilience.

“One can go onto Amazon Prime and order nearly any item that is conceivable. Yet gardening, similar to servant leadership, is a slow and challenging process,” he said. “One may be able to do everything ‘right,’ just for the perfect storm to ruin one’s crops. Thus, resilience is a necessary component of servant leadership. … There is also a sense of pride in being a part of something bigger than ourselves, which is an important part of servant leadership because it displays the importance of humility.”.

The experience has prompted Kapur to examine, with gratitude, the benefits of physical labor and servant leadership.

“In our modern technological era, instant gratification is abundant,” he said.

Thanks to the community service project, Habelt brought home a determination to embrace his community and act as a servant leader for the common good.

“Through our proactive hands-on service, discussions with community leaders and observations of historical figures, we learned how best to practice servant leadership in our own communities,” Habelt said.

An Amazing Temecula Wine Weekend You will Love

An Amazing Temecula Wine Weekend You will Love