by Involve Africa
in Business & Economy
0

Adesina was on a two-day official visit to the Horn of Africa nation. For more than two hours, he and President Guelleh discussed ways of transforming Djibouti’s economy as the country strives to achieve its vision of becoming an information, communication and technology (ICT) hub in the region. 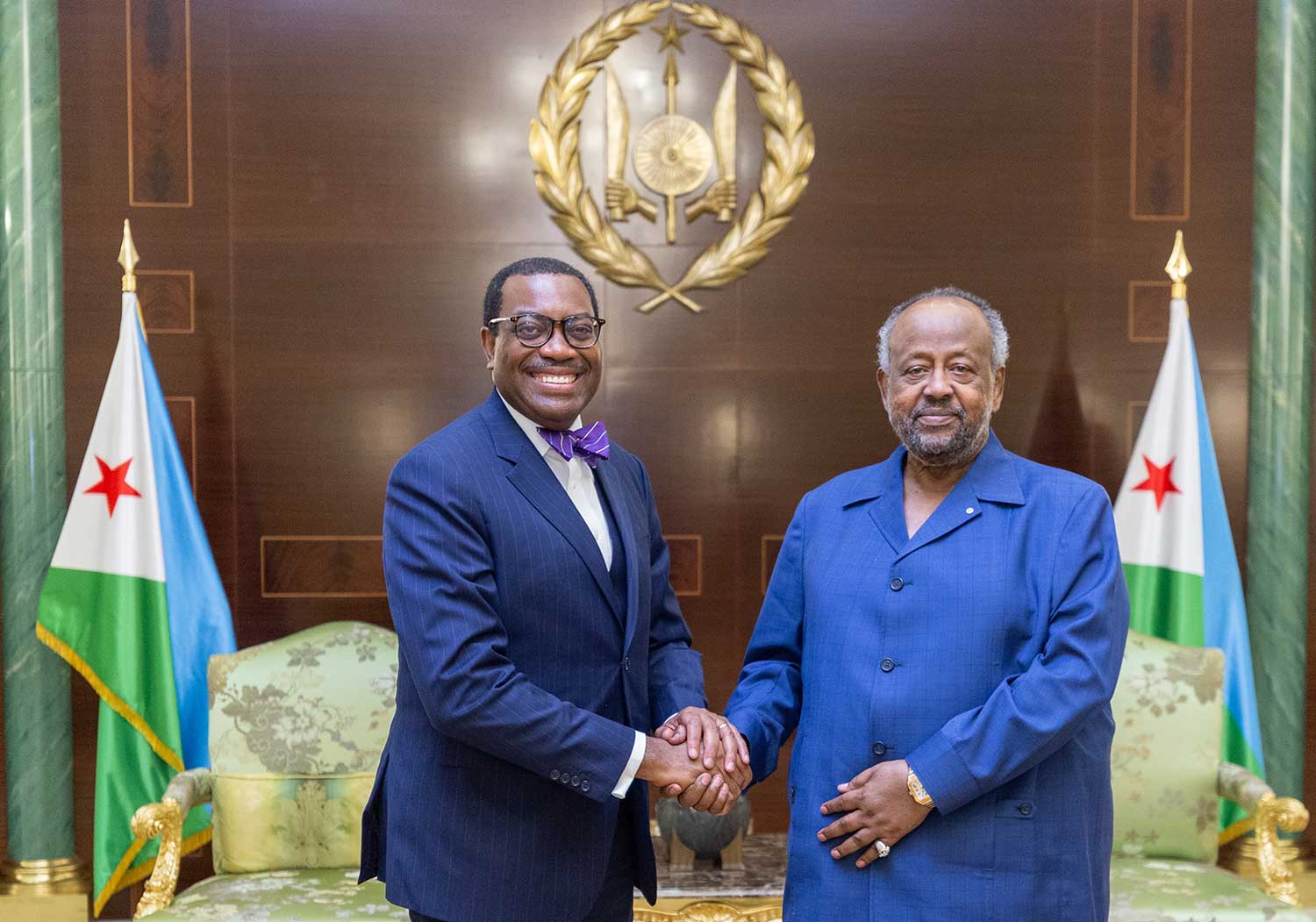 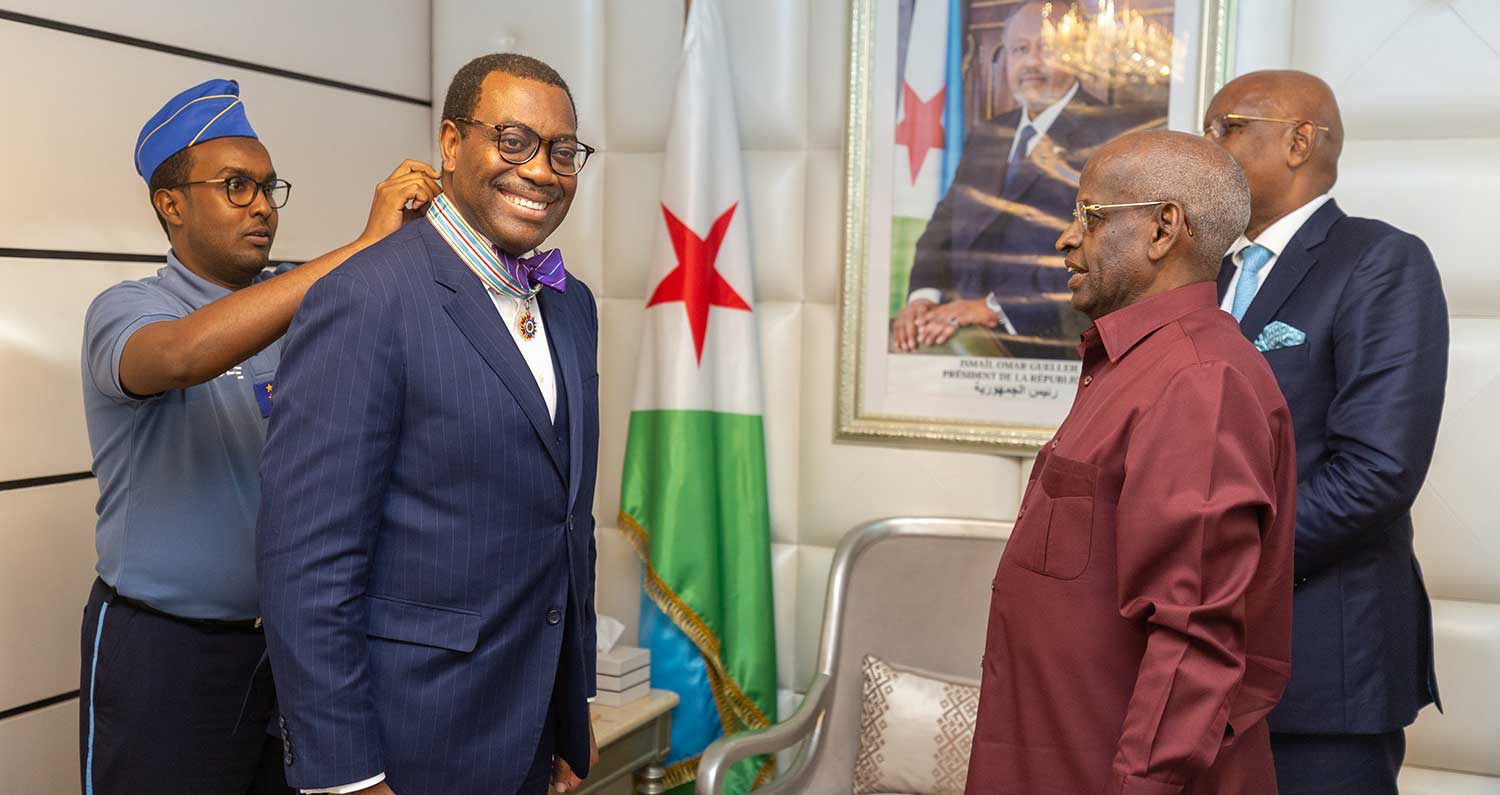 Djibouti is largely dry and barren. Its population of nearly one million people relies on imported food. Its Red Sea port remains the main source of income and employment. It is also a gateway for landlocked neighboring Ethiopia.

Adesina said: “Djibouti needs to look beyond the port, diversify its economy and scale up development. Flying over the country, one sees huge tracts of dry land. But it is only when one meets and talks to the people in this country that one realizes, there is no drought in terms of ideas, creativity, passion and determination.”

President Guelleh thanked Adesina for his first visit to Djibouti and commended the African Development Bank for its multifaceted assistance to the country.

“You are supporting us in various areas, including the budget support that the Bank is providing to help our country meet the unexpected effects of the Covid-19 crisis. We welcome your support to Djibouti by focusing on energy, climate change, agriculture and transport infrastructure resilience.”

Djibouti was invited to consider joining the Bank Group’s Africa Disaster Risk Finance facility (ADRiFi), through which countries receive support to insure themselves against extreme weather events. The facility is already helping nine countries pay for insurance premiums to protect themselves from the effects of climate change.

The Horn of Africa country could benefit from the introduction of the Bank’s Technologies for African Agricultural Transformation program, which uses heat-resistant wheat and water-efficient maize varieties to increase farm productivity.

Djibouti country could also consider hydroponics method that uses a water-based solution instead of soil to grow crops. Adesina said this could save Djibouti from relying on food imports. 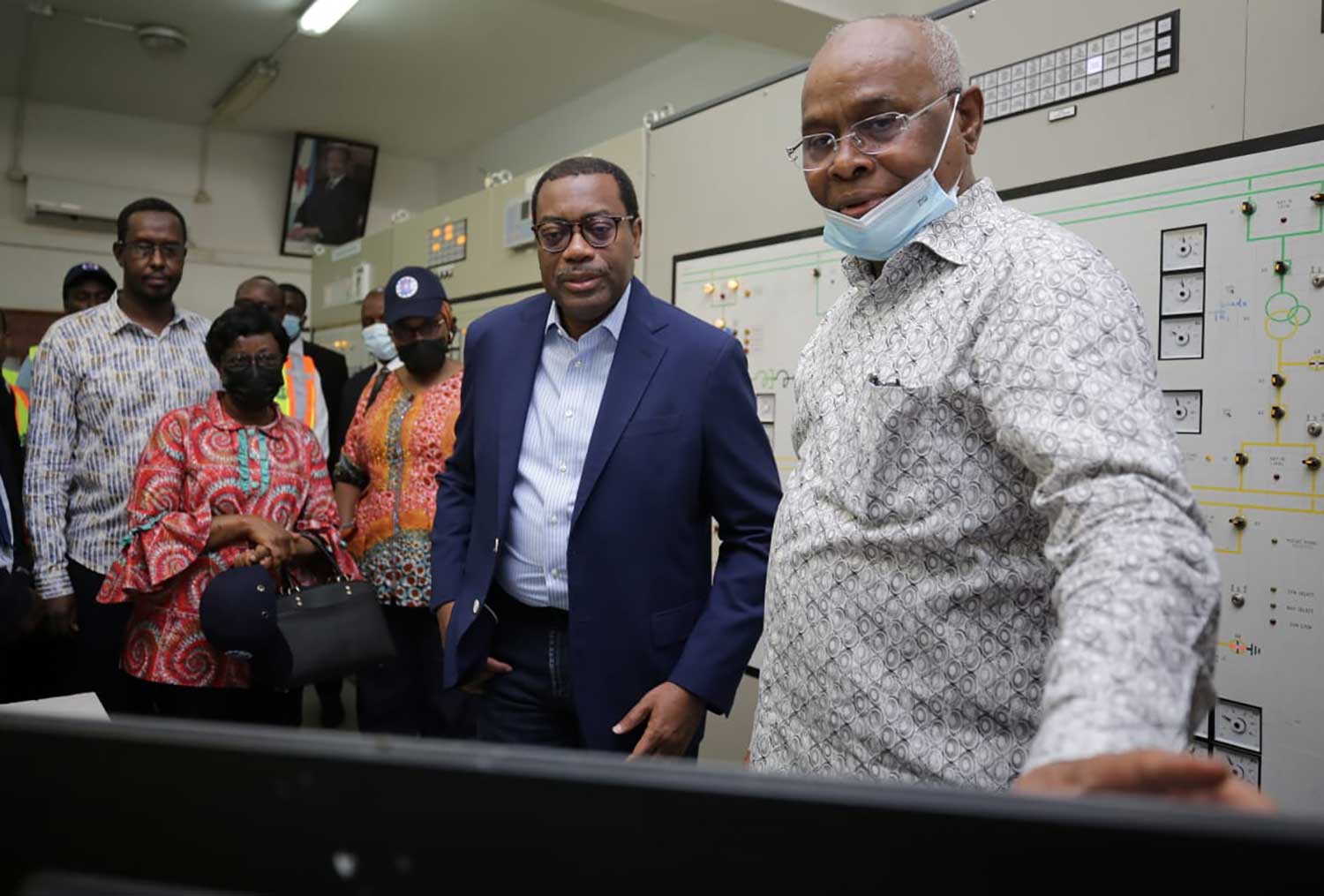 “There is no doubt in my mind that Djibouti will further help to connect Africa to the rest of the world, and also become a global center with data centers,” Adesina said, adding: “I definitely see a ‘Djibouti Beyond Ports,’ a nation that should move itself to becoming an ICT hub globally.”

The Bank Group chief also toured one of Djibouti’s interconnection substations for power imported from neighboring Ethiopia. The African Development Bank invested $60 million in the first interconnection with Ethiopia, to transmit a total of 320 megawatts. Djibouti has approached the Bank for a similar investment to distribute an additional 320-megawatt line from Semera in Ethiopia to Nagad in Djibouti, a distance of 192 kilometers.

Adesina said Djibouti needed a diversified power generation system and encouraged the government to invest in wind and solar power.

The African Development Bank has provided $20 million for geothermal exploration around Lake Assal region. The drilling and testing of the project have been completed.

The Bank is discussing with Djibouti, the construction of the first solar plant that will generate 15 megawatts of power. This plant will be part of the Bank-funded $20 billion Desert-to-Power initiative, which will deliver electricity to 250 million people across 11 countries.

Adesina said that with more African countries exploring clean and renewable energy, it is time to establish a regional training center for capacity building to serve the continent.

The Bank chief met with seven cabinet ministers and other officials, including Minister for Economy and Finance Ilyas Moussa Dawaleh, who is also Djibouti’s Governor for the African Development Bank Group.

On Sunday, Adesina interacted with young entrepreneurs. Fahima Mohamed Ismail spoke proudly about her passion for agriculture: “We are very well educated with PhDs, we put on makeup and we love agriculture.”

Africa’s Powerhouses Must Do More to Secure the Continent

Nigeria: Why I Keep Contesting for President – Atiku Abubakar

Nigeria: No One Can Claim Credit for Buhari’s 2015 Victory – Presidency

Africa’s Powerhouses Must Do More to Secure the Continent

Nigeria: Why I Keep Contesting for President – Atiku Abubakar

The race of the AI labs heats up

Key Highlights of a Wonderful Family Trip Around the World

Should You Stop Your Spouse from Giving Parents Allowance