The chant in Arabic blasted from rooftop loudspeakers, drowning out both the growl of traffic from nearby interstates and the chatter and clinking glasses on the patio of the dive bar that shares a wall with Minneapolis’ oldest Somali mosque.

Dozens of men in fashionably ripped jeans or impeccably ironed kameez tunics rushed toward the Dar Al-Hijrah mosque. Teens clutched smartphones, and some of the older devout shuffled in with the aid of walkers from the high-rise complex across the street where thousands of Somalis live.

This spring Minneapolis became the first large city in the United States to allow the Islamic call to prayer, or adhan, to be broadcast publicly by its two dozen mosques. 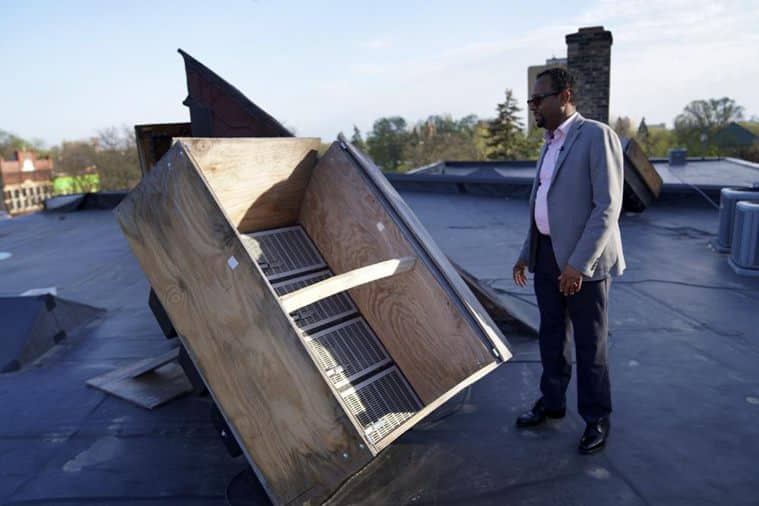 As more of them get ready to join Dar Al-Hijrah in doing so, the transforming soundscape is testament to the large and increasingly visible Muslim community, which is greeting the change with both celebration and caution, lest it cause backlash.

“It’s a sign that we are here,” said Yusuf Abdulle, who directs the Islamic Association of North America, a network of three dozen mostly East African mosques. Half of them are in Minnesota, home to rapidly growing numbers of refugees from war-torn Somalia since the late 1990s.

Abdulle said that when he arrived in the United States two decades ago, “the first thing I missed was the adhan. We drop everything and answer the call of God.” The adhan declares that God is great and proclaims the Prophet Muhammad as his messenger. It exhorts men _ women are not required _ to go to the closest mosque five times a day for prayer, which is one of the Five Pillars of Islam. Women walk down a street in the predominantly Somali neighborhood of Cedar-Riverside in Minneapolis on Thursday, May 12, 2022. (AP Photo/Jessie Wardarski)

Its cadences are woven into the rhythm of daily life in Muslim-majority countries, but it’s a newcomer to the streets of Minneapolis, which resonate with city traffic, the rumble of snowplows in winter and tornado siren drills in summer.

Americans have long debated the place of religious sound in public, especially when communities are transformed by migration, said Isaac Weiner, a scholar of religious studies at Ohio State University.

“What we take for granted and what stands out is informed by who we think of ourselves as a community,” he said. “We respond to sounds based on who’s making them.” That’s especially true when the sound is not a bell or a horn, but spoken words, as in the adhan. 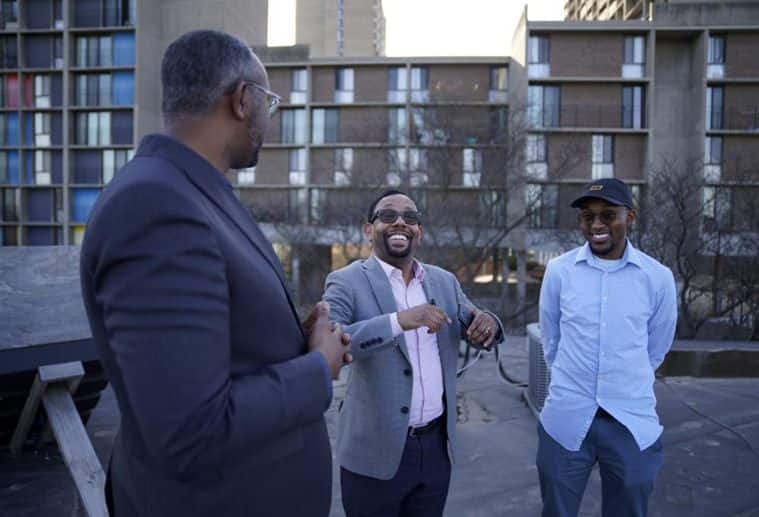 Jaylani Hussein, executive director of the Minnesota chapter of the Council on American-Islamic Relations, left, and Wali Dirie, executive director of the Islamic Civic Society of America Dar Al-Hijrah mosque, center, talk on the roof of Dar Al-Hijrah, where the call to prayer, or adhan, is publicly broadcast, on Thursday, May 12, 2022, in Minneapolis. (AP Photo/Jessie Wardarski)

“Hearing that voice, it’s a connection to God even if at work or in the fields or a classroom,” said Abdisalam Adam, who often prays at Dar Al-Hijrah. “It’s a balance of this world and the hereafter.” Dar Al-Hijrah got a special permit to broadcast for the Muslim holy month of Ramadan in spring 2020, when Minnesota was under a pandemic lockdown, so the faithful could hear the adhan from home, mosque director Wali Dirie said.

Soon it was resounding from speakers set up with the help of First Avenue, a nightclub made famous by Prince.

People thought they were dreaming and wept at their windows. An imam leads Friday prayers at the Dar Al-Hijrah mosque in Minneapolis on Thursday, May 13, 2022. (AP Photo/Jessie Wardarski)

That community need led to the recent resolution authorizing the broadcasts more broadly. It establishes decibel levels and hourly limits in line with the city’s noise ordinance, meaning that the early-morning and late-night calls to prayer are only aired indoors.

At Dar Al-Hijrah now, elders call the prayer three times a day, drawing youth like Mohamad Mooh, 17, who arrived just five months ago. He said he wishes the broadcasts were even louder like back in Somalia, where the early morning calls woke him up.

“I know it’s a little bit complicated because of the society,” Mooh added after a recent packed prayer service.

Just like some Americans opposed church bells in the 19th century, the call to prayer has led to disputes over the years, from Duke University to Culver City, California. In Hamtramck, a small city surrounded by Detroit, councilors exempted religious sounds from the noise ordinance at a mosque’s request. Coming in the aftermath of 9/11, the amendment got embroiled in national controversy, but a referendum to revoke it failed. The Rev. Hierald Osorto of St. Paul Lutheran Church, right, talks about a community mural on Lake Street in Minneapolis on Thursday, May 12, 2022. (AP Photo/Jessie Wardarski)

In the predominantly Somali neighborhood of Cedar-Riverside, tucked between downtown and two college campuses, Dar Al-Hijrah mosque’s adhan has met no backlash.

Hoping to also prevent it, the Abubakar As-Saddique Islamic Center in south Minneapolis, which hosts some 1,000 men for Friday midday prayers, plans to hold meetings with neighbors before broadcasting publicly this summer.

“We care about the neighbors,” said Abdullahi Farah, the center’s director. “We have to talk to them, explain to them and at least share our views on this.” Abdullahi Mohammed stopped at Abubakar on a recent afternoon when he was driving by and was alerted by a call-to-prayer app, which he and many others use in the absence of a public broadcast. He said he would love to hear the adhan ringing out everywhere because it would teach Muslim children to pray “automatically”- but also acknowledged non-Muslim neighbors “might feel different.” 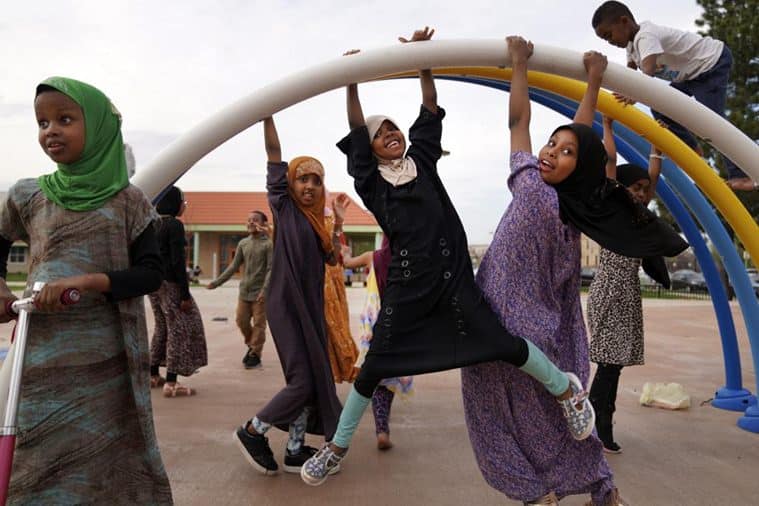 Children play at a park in the predominantly Somali neighborhood of Cedar-Riverside in Minneapolis on Thursday, May 12, 2022. (AP Photo/Jessie Wardarski)

Between hesitancy to provoke tensions, technical complexities and the challenges of arranging for someone with Arabic and vocal skills to chant the call live, several mosques may decide not to broadcast, said Jaylani Hussein, director of the Minnesota chapter of the Council on American-Islamic Relations.

But other mosques are already eager to push for permission to broadcast all five prayers and hope to see Minneapolis set an example for cities across the country.

“We want Muslims to fully exist here in America,” Hussein said, adding that the adhan is the “last piece to make this home. It’s incredibly important for Muslims to know their religious rights are never infringed upon.” Several neighborhood groups consulted by The Associated Press said that while no formal discussions have been held yet, they expect most residents will be accepting.

“People will ask, What’s that? and then say, That’s cool,” predicted Tabitha Montgomery, director of the Powderhorn Park Neighborhood Association.

At two churches, founded more than a century ago by Scandinavian immigrants and now within earshot of the adhan, leaders also had no objections.

“It reminds me that God is bigger than we know,” she said.

Hierald Osorto, pastor of the predominantly Spanish-speaking St. Paul Lutheran Church near Abubakar and another mosque, also anticipates no pushback from his flock.

In fact, he’s been thinking of bringing back the long-broken church bell as a way to gather the congregation and make it more visible in the neighborhood.
“It allows us to be known,” Osorto said.

Mowlid Ali, the imam at Abubakar, said part of the aim in broadcasting the adhan is precisely that mix of claiming belonging and outreach.

“We hope that through calling the adhan in public, it would actually bring more interest from the neighbors in knowing about the religion of Islam,” Ali said.

QoD: What % of 18-24y/os learn personal finance from social media?