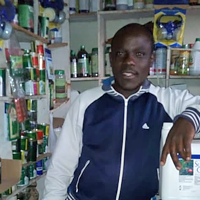 Agro-input dealers are often thought to be only interested in making money any way that is possible, otherwise known as “making a fast buck.” But enlightened dealers can combine the profit motive with a concern for customers’ well-being to earn their trust and make a business that lasts.

Richard Businge has a small shop in Fort Portal, Uganda, selling farm tools, seeds and other inputs. In 2016 Richard discovered that he could use Access Agriculture farmer training videos (www.accessagriculture.org) to attract and keep customers.

At university, Richard studied computer science and Monitoring and Evaluation (M&E). His first job, as part of a donor-funded project, taught him how hard it was for farmers to find quality inputs, so when the project ended, Richard started his own business. But competition was stiff.

One day Richard mentioned this to his mother, who had educated her children by selling goods in the market. At one point, she had taken second-hand clothing from market to market. So she suggested “take your products to the farmers in the market, rather than have them come to you.”

So once a month on market day Richard takes his two helpers and some goods in a taxi to one of six nearby towns, going every six months to each market. Small towns in Uganda always have at least one video hall, called a chivanda or bibanda, made of black plastic sheeting and light wood. Customers pay a few coins to watch a commercial movie, often an action film. Once everyone is seated, the chivanda door is closed.

Richard pays 100,000 Ugandan Shillings ($26) to get the sole use of the chivanda for three hours. First, he hires a person to stroll around the market with a loudspeaker, announcing when and where shoppers can go to see free videos. “Farmers don’t miss this opportunity!”

Richard plays popular music for half an hour as people drift in, allowing them to take their places and not get too bored. He then plays a video which he has previously downloaded from Access Agriculture and stored on a USB stick. He simply plugs the memory stick into the chivanda’s movie player or laptop.

After the first video, Richard takes questions from the audience before moving on to a second and finally, a third video. The videos only last about 15 minutes each, but with the Question and Answer (Q&A) sessions, and the music, Richard makes full use of the chivanda for three hours.

Because Richard shows the videos for free, the chivanda door stays open all the time, and farmers come and go constantly. Just outside the chivanda door, Richard has a stall set up where his assistants sell goods, including some of the goods the farmers have seen in the videos, such as PICS bags (plastic bags for keeping insects out of stored beans and grain). Sometimes Richard shows videos on how to grow onions, which helps him to sell onion seed.

A veterinarian colleague sets up a stand nearby and sells animal health products; having two allied businesses helps to attract more customers.

Richard is not an agriculturalist, but he reads a lot, and he looks for information on the Internet so he can answer farmers’ questions during the video show. When he doesn’t know an answer, he says: “I don’t know, but I will find out and get back to you.” Fielding questions gives Richard ideas for new topics that interest farmers. He then discusses these on a talk show he does on the radio every Saturday morning in the local language, Lutoro.

Sometimes farmers who have seen the videos in the market come into the shop (Kiyombya Agro Enterprises) in Fort Portal and ask to watch a specific video again. “Show me the one on onions!” Richard or an assistant is happy to play the video.

Richard says “Videos also helped to bring more customers into my shop. They trust more what we are selling because we have the videos and because of the videos the customers know that I have more information than some other dealers. So, they come to find out more.”

Building a clientele gradually, sharing ideas and earning trust, may not be the fastest way to make a buck, but a business that serves the community and supports a family can be built on enlightened self-interest, sometimes with a little help from farmer-learning videos.

Storing and managing maize in a warehouse