No Result
View All Result
Home All African News 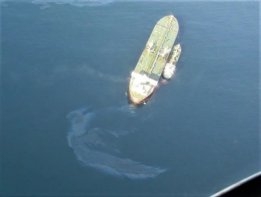 The spill happened on May 23. Image Credit: SAMSA

The authorities in South Africa are optimistic over the environmental impact of a bunker spill in Algoa Bay earlier this week.

BBC to cut hundreds of jobs at World Service

Bunker fuel was spilled in Algoa Bay on May 23 during a transfer between the tanker Umnega II and the barge MT Lefkas, both operated by Minerva Bunkering. Bunker operations in the area have remained suspended since then.

The two vessels have now been separated, the South African Maritime Safety Authority (SAMSA) said in a statement on its website on Friday. No oil has reached the beaches, most of the spilled oil has been cleaned, no oiled birds have been spotted and no oil sheen is visible on the water.

Surveillance aircraft are continuing to monitor the area.

“If there is any oil spotted the aircraft will also complete live oil spill modelling to determine the direction of oil, however the authorities are optimistic that most of the oil has been recovered and only the vessel hull cleaning needs to be completed,” SAMSA said.

“The Environmental Protection Vessel , the Sarah Baartman is on standby in Algoa Bay to assist with the clean-up operations.”

The spill comes not long after SAMSA resumed taking applications for Algoa Bay bunker licences after a three-year moratorium. Environmental groups have in the past raised concerns over the risks of bunkering in the area.

Here are seven African child prodigies you should know.

BBC to cut hundreds of jobs at World Service

The Guide to Cycling in Cape Town

Innovation at a crossroads after pandemic, says UN – World