Soil for a living planet 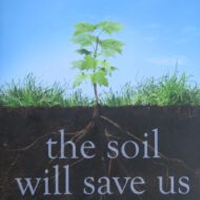 In a refreshingly optimistic book, ‘The soil will save us’, Kristin Ohlson explains how agriculture could stop emitting carbon, and instead remove it from the air and place it in the soil.

Soil life is complex. A teaspoon of soil may harbour between one and seven billion living things. Microorganisms like fungi and bacteria give mineral nutrients to plants in exchange for carbon-rich sugars. Predatory protozoa and nematodes (worms) then eat the fungi and bacteria, releasing the nutrients from their bodies back to the soil.

Reading this in Ohlson’s book reminded me of farmers in Honduras and around the world, who have been telling me for over 30 years that soil quickly “becomes used to,” or “accustomed” to chemical fertilisers. Local knowledge is often ahead of the science.

When soil is ploughed, it loses some of its carbon. The plough lets in air that binds with the carbon to become C02, which rises into the atmosphere. Ploughed soil is broken, and more prone to erosion than natural, plant-covered earth.

One of the many people Ohlson interviewed for her book, innovative North Dakota farmer Gabe Brown, grows a biodiverse mix of cover crops, including grasses and legumes. But instead of harvesting these crops, Brown lets his cows graze on them. Then he drills maize or other cash crops into the soil, instead of ploughing it. No chemical fertilisers are applied.

This soil is productive, while saving labour and expense, and absorbing carbon instead of giving it off. This healthy soil holds more water than ploughed soil, so the crops resist droughts. Brown developed this system working with Innovative scientists like Jay Furhrer and Kristine Nichols of the US Department of Agriculture (USDA), an example of the power of collaborative research.

Brown is not the only farmer trying to conserve the soil, but when Ohlson was writing about a decade ago, only 4.3% of US farmland was enrolled in any kind of government land conservation programme.

Encouraging more farmers to conserve the soil will require public universities to do more research on no-till farming i.e., forsaking the plough and encouraging cover crops and livestock grazing to boost soil fertility.

Universities have to stop accepting grants from companies that produce the chemical fertiliser, the pesticides and the genetically modified crop seeds that tolerate them. Accepting corporate money diverts university research into chemical farming, even though taxpayers still pay the faculty members’ salaries and society pays the price for soils becoming unproductive in the long-term.

Fortunately, there is much that we can all do at home, in gardens, parks and even lawns. The biggest irrigated crop in the United States is not maize, but lawns, which take up three times as much space as maize. Lawns can be managed without chemicals: fertilised with compost, while clover and other legumes can be planted among the grass to improve the soil.

Families can make compost at home and fertilise the garden with it. City parks can also sequester carbon. The Battery Park in Manhattan is fertilised entirely with compost and compost tea (a liquid compost).

I was encouraged by this book. Agriculture could be the solution to climate change, and even help to cool the planet, rather than being a major contributor to the problem.

In 2015, just after Ohlson’s book was published, some 60 people from 21 countries met in Costa Rica and formed Regenerative Agriculture, an international movement united around a common goal: to reverse global warming and end world hunger by facilitating and accelerating the global transition to regenerative agriculture and land management. Click here to find a partner organisation in your area.

Ohlson, Kristin 2014 The soil will save us: how scientists, farmers and foodies are healing the soil to save the planet. New York: Rodale. 242 pp.

Access Agriculture videos on how to improve the soil

See some of the many videos on soil management hosted by Access Agriculture.