Peju Layiwola carefully removes the inventory labels from the Benin Bronzes; her movements are deliberate, almost reverent. The moment is captured in a film that is shown at the Rautenstrauch-Joest Museum in Cologne, as part of the “I miss you” exhibition.

When she touched the objects for the first time, the Nigerian artist and art historian says she felt nostalgic, knowing the history of these works. While she says that she felt captivated by the beauty of the Benin Bronzes, she could not forget “that these works were removed in the context of killing people — that people died in the process of the works coming down here,” she told DW.

The Rautenstrauch-Joest-Museum (RJM) houses the world’s fourth largest collection of the so-called Benin Bronzes, works of art made of brass, ivory, coral and wood in the former Kingdom of Benin (modern-day Nigeria).

In 1897, they were stolen from the royal palace in Benin City. Under the command of Admiral Sir Harry Rawson, 1,200 British elite soldiers attacked the former royal city, killing countless people and burning the city down to its foundations. 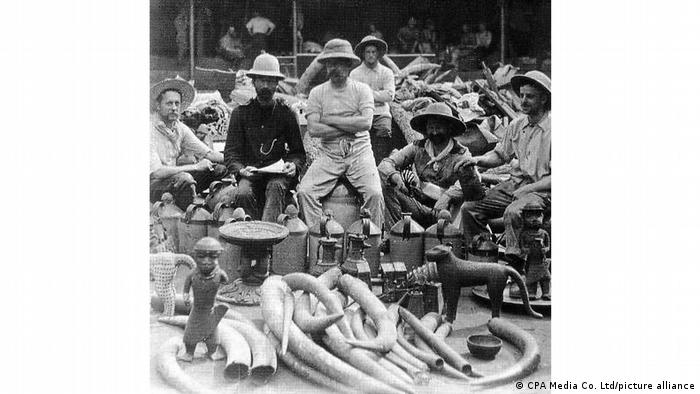 The destruction of a mighty kingdom

Until that attack, the Kingdom of Benin was independent from the rest of Nigeria, which had already become a British colony.

With the devastation of the city and the exile of the king, the British were able to expand their colonial territory and destroyed one of the most important and powerful kingdoms in African history.

A large part of the looted art treasures ended up at auctions in London at the beginning of the 19th century, from where they made their way to Europe and America — 96 of them landed in the collection of the RJM in Cologne. 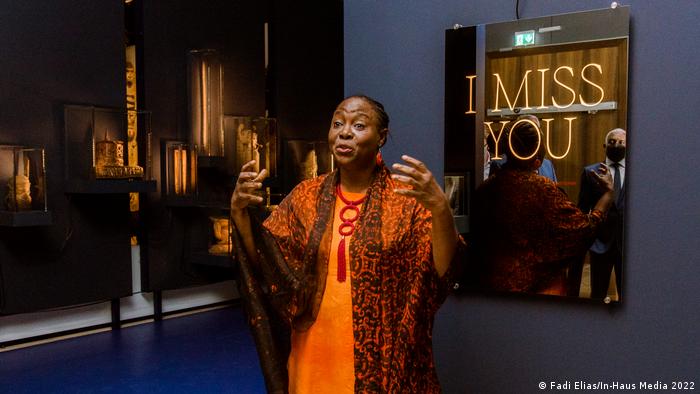 Peju Layiwola already wanted to become an artist as a child

Peju Layiwola’s great-great-grandfather, Ovonramwen Nogbaisi, was the “Oba” — as the kings are traditionally called there — of the Kingdom of Benin when the British invaded Benin City.

Her grandfather, Evewka II, rebuilt the palace in the mid-20th century.

“My mother grew up in the king’s palace,” Layiwola explains. And since her mother was very interested in her origins, she told her daughter many stories about Benin, allowing Layiwola to develop her awareness of the kingdom’s art and culture.

Encouraged by her mother, who was an artist herself, Layiwola studied fine arts in the Nigerian cities of Lagos and Ibadan. She focused on the history and art of the Kingdom of Benin during her studies.

She had already learned about the 1897 British invasion of Benin as a child, but she actually understood the impact of it “much later, when I began to study art and the history and to see how very violent that event was.”

Layiwola has curated several exhibitions on the history of Benin in recent years. Among other projects, she designed a room for the RJM exhibition “Resist! The Art of Resistance,” an exhibition told from the perspective of the colonized.

In her artistic work, she also aims to draw attention to “historical injustices,” because the effects of colonial rule can still be felt to this day.

This is also the topic of the current exhibition in Cologne, “I miss you,” for which Layiwola worked closely with museum director Nanette Snoep. “‘I miss you’ is about broken memories, about colonial phantom pains and trauma caused by archaeology, by the colonial legacy of devastation and dispossession and passed down through generations,” says Snoep, who has directed the RJM since 2019. “In this way, ‘I miss you’ serves as a platform for mourning, for an ongoing and never-ending process of healing colonial rifts in our society.” 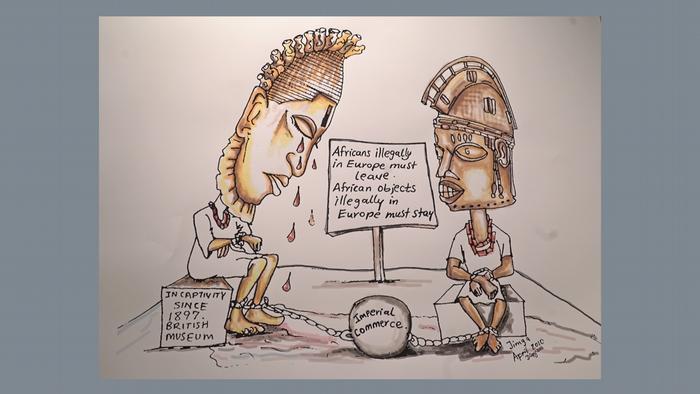 A cartoon by Jimga Jimoh Ganiyu, part of the ‘I miss you’ exhibition

Africa has ‘lost’ most of its cultural heritage

The Benin Bronzes are the most prominent example of looted colonial art, but throughout the African continent during the colonial period, many more artworks and cultural assets were stolen or misappropriated through injustice such as blackmail or deception.

Many sacred objects were also stolen. Experts estimate that between 80-90% of Africa’s cultural heritage is outside the African continent. For many Africans, the loss of culture is accompanied by a loss of identity.

Turning point in the restitution debate

The debate about the return of these objects has been gaining momentum throughout Europe for several years.

Germany wants to make “substantial returns” to Nigeria this year. That’s why the exhibition in Cologne has a starting date, but it is not yet determined when it will end. The idea is that the bronzes will go from Cologne directly to the West African country.

The negotiations between all the parties involved have made major progress, according to Nigerian ambassador Yusuf Maitama Tuggar: “Our hope is that we will be able to sign before June,” he told DW at the opening of the exhibition.

Peju Layiwola longs for the day when the objects will return to their home.

She points to a traditional sword in the exhibition: “That’s the ‘Eben.’ It belongs to the king, but is also carried by high chiefs in Benin.” The sword is forged from steel, but various other materials such as cloth, plant matter, ivory and leather were also used to make it, the art historian said. “It’s a unique piece that demonstrates the artist’s ability to work with a wide variety of materials and reflects just how demanding art was at the time.” 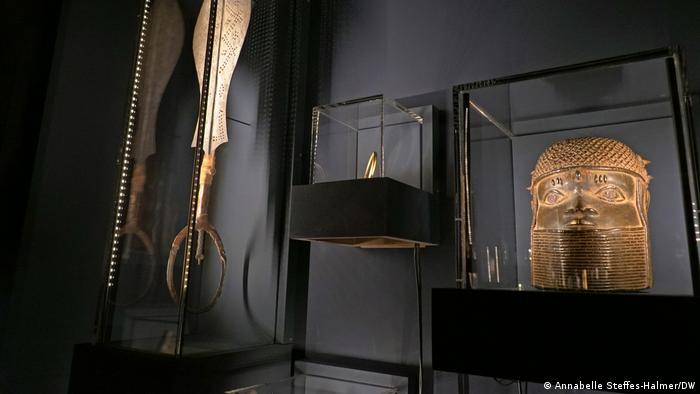 Such swords are still made today in Benin City, which is home to important guilds such as ivory carvers and bronze casters.

“Benin is therefore a living culture. It is a culture that is evolving and that will not die out,” says Peju Layiwola.

The absence of the various cultural assets has inspired artistic practices on site; their return will definitely generate even more art and culture, believes Layiwola.

To date, it has not yet been decided to whom the objects will be returned. To the state of Nigeria, the current king of Benin or the state museum in Benin City? Or maybe all three?

No matter what the solution is, museum director Nanette Snoep wants to continue working with Nigeria and start new collaborations.

This article was originally written in German.

From teacher to Netflix hitmaker

From teacher to Netflix hitmaker